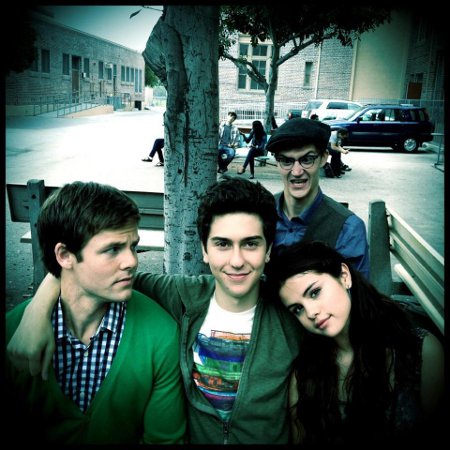 Selena Gomez is getting super close with her male costars on the set of Feed the Dog. The picture shows Selena Gomez getting really close and personal with Nat Wolff, among others, on the set of her new movie. I guess the picture looks innocent enough, but we have to ask this question: Is Justin Bieber jealous that Selena is spending so much time with other guys while he’s not around?

Even worse, check out these photos of how Selena dressed for her date with Justin – she clearly is not feeling close to the Biebs these days.

The new movie pairs up Selena Gomez, the former Disney princess, with former Nickelodean star Nat Wolff. There’s not much out there yet on the movie, but it sounds like it will continue to fall within Selena’s comfort zone: family friendly, humorous, feel good movies. One day it might be nice to see Selena take a risk and attempt a movie that is a little non traditional for her, but she still has many more years of acting in her to test the waters.

Now back to Bieber’s feelings . . . is Selena making the poor lil’ dude feel bad by posting pictures of herself snuggled up in the shoulder of her male costar? Chances are Justin is fine, and I don’t think we’re going to go so far as to say Selena is cheating on Beebz, but might his feelings be a little bit hurt? Is Selena trying to send him a message — a cry for attention maybe? She posted the picture on her Facebook account.

Let us know what you think in the comments below. Is there going to be a Selena Gomez and Justin Bieber breakup on the horizon? Or is GoBeebz an item for life — maybe even a pair for marriage?