Is Teresa Giudice Bullying And Pimping Out Her Daughter, Gia Giudice? 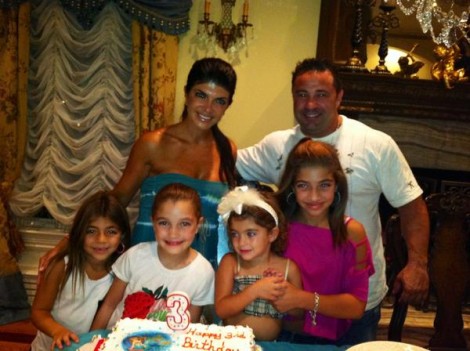 You have to draw the line as a reality star with how far you’ll go for your 15 minutes of fame. Will you let the cameras into your life or your whole family’s? Will you let the viewers in as you pee on a stick and find out you’re pregnant a la Bethenny Frankel or keep them at a distance like Caroline Manzo? It’s no secret Real Housewives of New Jersey star Teresa Giudice is hungry for Bethenny’s fame and fortune. But is her hustle starting to take its toll on her oldest daughter, Gia Giudice?

During her first season I thought Teresa’s whole motivation for the show was launching Gia’s modeling career. She tried and it didn’t quite work and then Teresa found out her lack of skills and proper English were their own hot commodity so Gia took a back seat for a couple seasons. But now she’s back. Teresa’s done pimping out the modeling and more about the music and dancing now. Radar Online has a pretty gross pic of Teresa and her eleven-year-old posing for the cameras. Is that outfit and make-up age appropriate? Maybe Gia was at a dance concert or something but it’s a bit much for sure.

Teresa has come under fire for how much she allows Gia to get involved in the show (and much more damaging) the after-show politics. She has her own Twitter account and has even used the platform to deal with Giudice “haters“. There’s even stories where she’s getting bullied at school. Radar reports:

Meanwhile, Gia has her own Twitter and Tumblr accounts where she sometimes gets mixed up in her mom’s TV drama — often writing about the “haters” and dissing her own aunt, Melissa Gorga.

“What is your favorite song by your Zia Melissa?” a fan asked.

“Not to be rude but I don’t have one and I don’t listen to her songs!” Gia replied via Tumblr on October 2.

Another fan stated to Gia, “no u got it mixxed [sic] up you got a handful of people who love your mom and a lot more people who hate her.”

“So I wouldn’t be talking and all of my followers always send me nice tweets! But of course u got your haters! And my mom has all nice tweets but like I said we have our HATERS!!”

The family insider is worried that Gia is too involved with the fans and haters of the show.

“Gia knows too much for her age,” the source said.

So is Teresa going overboard with creating her empire? Should she leave her daughters out of it? One might argue that Caroline Manzo’s whole reason for being on the show is to highlight her children’s careers. But her kids are adults. Gia is still a child and has been presented with very adult themes. She’s already been labeled a spoiled brat and said things she’ll probably regret when she’s a little older. Does an eleven-year-old need that kind of drama?

Also, Teresa is turning her daughter into a child star without actually being a star. Child stars have it bad enough when they grow up and realize they’re not cute anymore but at least they had some talent. Gia’s talent is up in the air right now so essentially Teresa is creating an attention-hungry celebrity who won’t have anything to stand on during those lean years. The idea that Gia would be satisfied with the normal high school and college track seems pretty doubtful. But normal has been taken off the table. There is no sense of normalcy with the Giudice family anymore. Gia’s face is on tabloids. She’s found that she gets instant attention when she tweets about whatever comes to her mind. But eleven-year-olds don’t understand concepts like 15 minutes of fame or flavors of the month. Could this be damaging in the long run?

The provocative clothing and make-up are disturbing but what Teresa’s doing to that poor girl’s psyche is even more so. I have no idea who’s driving the bus. Is Teresa Giudice bullying Gia to grow up faster so she can capitalize or is Gia thirsty to be a star? Do you think Teresa even thinks about the potential harmful affects the show can have on her children? Will it only get worse with the spin off?