Teresa Giudice To Get Spin Off From The Real Housewives Of New Jersey? 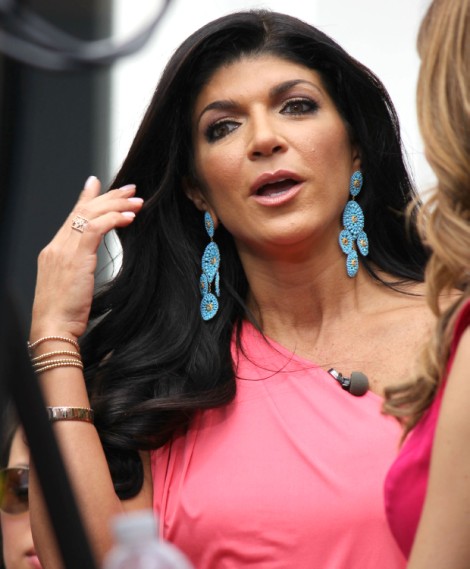 Can you contain yourself? I’m not sure if I can. It’s almost like Christmas and the Fourth of July landed on the same day. Real Housewives of New Jersey crazy pants Teresa Giudice to get a spin off?? About time Andy Cohen!

But let’s be honest. Do we even care about Teresa? I don’t. I’ve said it before. All Andy Cohen needs to do is film Joe and daughter Milania Giudice sitting on the couch all day long and I would watch like a fiend. Everything that comes out of their mouths is gold! Teresa’s nonsense just gets in the way. Gia is getting to that stage where she gets embarrassed easily and just wants to hide. The baby, Audriana, is OK but she doesn’t do anything for me and I’m pretty sure Gabriella is an extra they hired in because she looks nothing like the others and gets absolutely no attention from her parents. That’s why the show should be the Joe and Milania Hour!

All the drama and crazy things that Teresa and Joe have done is what makes them perfect candidates for their own breakout show,” a source close to the situation exclusively tells RadarOnline.com.

“They’re in talks right now and the show would include the whole Giudice side of the family, which would explain why we saw more of Joe’s brother Pete and his wife Sheila in last Housewives season.”

However, the source notes one large hiccup that could put a kink in the Giudice’s plan; Joe’s impending fraud charges that he’s facing up to 10 years in prison for.

Joe will stand trial for fraudulently obtaining a phony driver’s license after he was accused of using his brother’s identification to get a new license when his own was suspended due to a DUI.

“With Joe’s possible jail time they’re trying to iron out how this show would work, but they’re definitely pushing forward on it,” the insider said.

The source says Bravo has exhausted all the drama they can get out of the current New Jersey cast, so their best option is a spin-off with the popular characters.

“People are starting to bore with the same old cat fights every episode so they need to change it up,” the source said.

“And those Giudices will do anything to earn a dollar!!!”

Go on Giudices. Make your money. If I’m dumb enough to watch you and your reruns incessantly then you should take advantage of it. I’m not hatin’. Make your dollar! You’ve got to hand it to Teresa. She hustles. Will you watch? Of course you’ll watch! You love that rascally family as much as I do. If we’re lucky we’ll get more of Joe karate kicking in the garage and doing the splits in the bedroom. It’s truly win/win for all involved.

And I am ready for something new. I couldn’t stand this last season of RHONJ. It was boring. I think Andy should have waited awhile longer before he started filming. It seems like he filmed seasons 3 and 4 back to back so it didn’t give the ladies any time to come up with anything interesting or different to talk about. I wonder if Teresa will do both shows. I doubt it. Caroline Manzo and Jacqueline Laurita couldn’t stand when she branched out to do tabloid covers. They’re going to flip their sh-t when she has a new show, right?