Is Too Thin Kendall Jenner Bragging About Her Weight Loss? 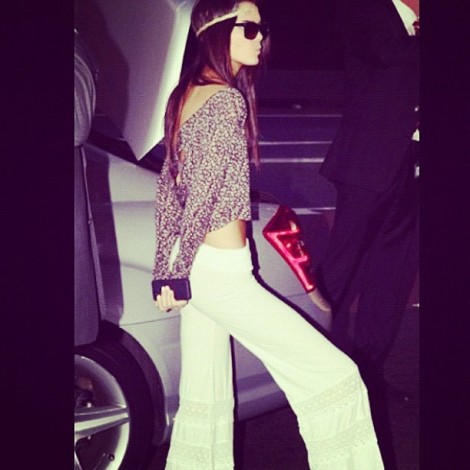 Kendall Jenner’s been down in Australia working or whatever Kardashians call it and hasn’t missed a beat showering her fans with pics of her every move. She celebrated her 17th birthday and kissed some koalas so, all in all, it seems like a successful trip for Kendall and momanager Kris Jenner. Only one problem – Kendall’s looking a little lean these days, yes? She’s mentioned dozens of times that her goal is to be a top model. Fine. Great. It’s good to have goals outside the realm of reality shows and sex tapes but should her staggeringly thin frame be a source of concern for the family or is its one-tracked mind for success leaving Kendall with no sense of perspective?

After doing some half-assed research I found out that Kendall’s 5’11” and wears a size 1 which pretty much means she’s a size zero. She just looks like a gangly kid to me with no hips, boobs or ass yet. She’s obviously a Jenner. So although she is thin, Kendall Jenner doesn’t gross me out like some other barely there stars. It doesn’t help that she wears bandage dresses though. Those kinds are dresses are perfect for Kim and Khloe Kardashian who are trying to convince the world they’re curvy and not just eating too much ice cream. So Kendall’s basically a little girl wearing big girl clothes. The clothes wear her, and as a model in the making, it should be the other way around. Again, she’s young. She’ll figure that out in time.

So I’m not too sure if there’s anything going on here. Since we’ve watched her pole-dancing on her family’s show from a very young age we’ve seen that her body is naturally tall and lanky. It’s not like Kendall was a roley-poley who just recently starved down to a beanstalk. So if she can fulfill her dreams of being a model without too much deprivation then power to her. HOWEVER, she’s 17 and posting sexy pics of herself on the internet and joining a profession where you can never be too skinny. These are murky waters. When you glorify the skinny, and not necessarily the healthy, at a young age trouble can follow. I like to think that as much as I detest the Kardashians at times they actually have pretty good body images. They embrace their curves and refuse to fight their genetics. It’s a good message. If you can’t be with the body you love, love the one you’re in and all that jazz. But I’ve talked about big families before. They’re inner-workings are interesting. Everyone has to find their own place. You can’t have two sex tape stars, two X Factor hosts, etc. So Kendall has the model body and is going the model route. It makes sense. Hopefully she won’t go the unhealthy route to differentiate herself from her famous sisters. What’s good is that her sisters are there watching. I don’t always trust Kris Jenner’s motivations. She’s busy and has her eye on the prize. I could see her overlooking her daughter’s weight loss but I can’t see Khloe or Kourtney doing the same. Trust me. It sucks to have opinionated sisters are times but it’s also a blessing. In the Hollywood climate of yes men who else is going to tell you the truth if not your loudmouthed older siblings?

Take a look at some pictures of the young model in Australia. Kendall Jenner is definitely skinny but do you think she’s too skinny? Also, is Kris turning a blind eye to it?