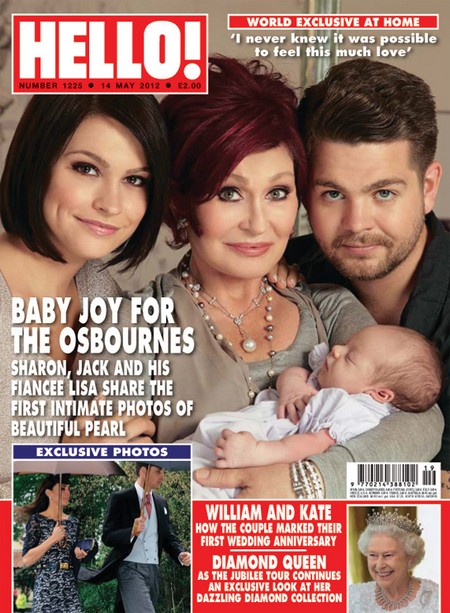 Jack Osbourne and girlfriend Lisa Stelly only new each other for a few months before she dropped the bombshell on him that she was pregnant.  Flash ahead a year and the duo are now first-time parents to baby, Pearl.  If the cover of the new Hello! Magazine is any indication; the new family is bonding quite nicely.

Pearl, who is the granddaughter of rocker Ozzy Osbourne and niece of Kelly Osbourne — was born April 24 in Los Angeles and weighed in at 8 lbs., 6 oz.  Jack seems to be quite smitten with his new little bundle,

“People say when you have a kid it’s like instant love, but unless you’ve experienced it, it’s impossible to comprehend,” the new father also admits to being blind sighted by the news when Lisa first told him that she was pregnant.

I think I responded with ‘That’s interesting. What do you say? If we’d been trying for two years, of course you’d be like ‘Awesome!’ But we met in May and found out in August.  I told Lisa: ‘You need to give me a week to really take this in’. I had that time to get my head around the whole situation.”

According to new grandmother, Sharon Osbourne, Jack has more than gotten his head around things.

“It’s incredible to see Jack holding his baby girl, walking around so confidently…He’s very nurturing and he and Lisa are so good together.”