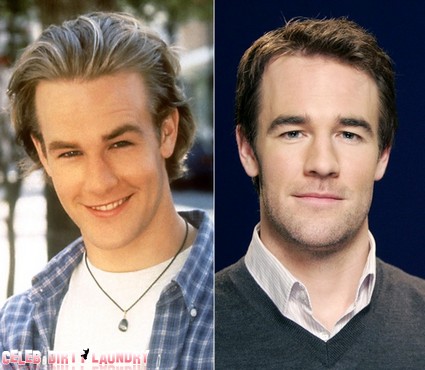 If you turned on a TV between 1998 and 2003 chances are you caught an episode – or three or 53 – of Dawson’s Creek. It was the teen drama that kicked off Katie Holmes and Michelle Williams careers. Well, the long talked about reunion has moved a step closer after Dawson himself  – James Van Der Beek – announced he’s up for it.

When asked about stepping back in time the one time teen pin up told Entertainment Weekly ‘I mean, if somebody came up with a brilliant idea how to do it, why not?‘ But he jokes about Oscar nominee Michelle Williams involvement  ‘I always love that Michelle is like, ‘I definitely wanna do it! I’m in!’ which is so easy for her to say because her character is dead. I always smile when I see that‘ But he’s really excited for her big time movie career – which has so far eluded him ‘It makes me feel really happy.’

But what about his other teenage co-star who is now Mrs Tom Cruise. He admits Katie – who played Joey Potter – has moved on ‘She seems a little more mature, to be honest with you. I think people transpose whatever preconceptions they have about the whole thing onto whatever behavior they see. Honestly, I don’t see a big shift or difference. It’s her, but a little more mature and I think comfortable in her skin’ But never say never.

If there was ever a time to revisit the former TV favorite it’s now – next year will be the tenth anniversary of the end of the show.

Check out a former Dawson’s Creek star now : Michelle Williams Is Smokin’ Hot On The Cover Of GQ