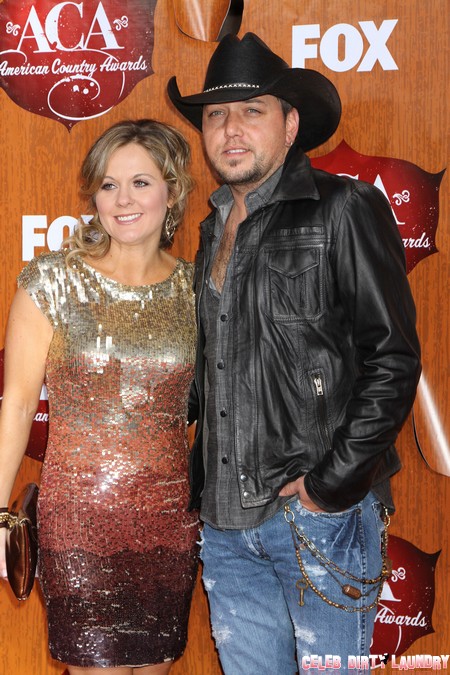 Platinum country artist Jason Aldean found himself in a sticky situation after news broke that he was caught cheating in LA with American Idol alumna Brittany Kerr. The irony wasn’t lost on us—Jason and his family are the cover story on this week’s People Magazine. The article tells the story of an involved and loving family, one that has tickle fights, goes toy shopping, and has family dinners of mom’s home made macaroni and cheese. News of Jason’s affair with Brittany has shaken that image, and now Brittany has been forced to shut down her Twitter after getting hateful tweets.

Jason has since released a statement, chalking it up to a bad decision made while drunk. He swears that he got into his tour bus alone, and photos seem to show that the worst thing that happened was a grinding make out session. We have to wonder—will his Facebook apology be enough for his wife and daughters? The country star married his high school sweetheart in 2001, and the family lives on a large property in Tennessee. What will the affair mean for Jason’s daughters Keeley, 9, and Kendyl, 5?

The girls live at home with mom while Jason is touring, and the on-the-road life has to be hard for them. There have been rumors of trouble in their paradise before, and I can’t help wondering if this is about to become a scandal of Tiger Woods proportions. How many other women has Jason left standing outside of his tour bus? There’s always a scorned woman who is eager to claim 15 minutes of fame, but how long will it take for her (or them) to come forward?

Jason promised in his People interview that the family is very close and spends lots of time together, whether it’s shopping for toys at Target or running errands at Home Depot. But whether or not Jessica decides to define her value and file for divorce (because who wants to be with a man that can’t keep it in his pants?), Jason’s actions will definitely have a terrible affect on the young girls. It’s one thing for parents to divorce, but for a young child to have their father break all trust is something rarely recovered from.

I hope that Jessica will use this as an opportunity to teach the girls what it means to be a father, and husband. Jessica can definitely do better—even if the cheating never escalated to sex or long-term lies, it shows how little value Jason has for his family. He goes to a bar, has a couple drinks, and the next thing you know he’s telling Brittany that he isn’t married and they’re going at it in public? I wouldn’t want my kids around someone like that!

What will these daddy-issues mean for the girls as they grow up? It isn’t unheard of for kids from families like this to make awful decisions in relationships, ending up with alcoholics, abusers, and drug users. Will Jessica decide that the girls are too young to know the truth of the situation? She won’t be doing them any favors by lying to protect their dad. They’ll find out eventually, and learn that any relationship that grows from the lie will be entirely fake. What do you think? Does hot and heavy making out qualify for a divorce? What’s the best way for a mom to respond?