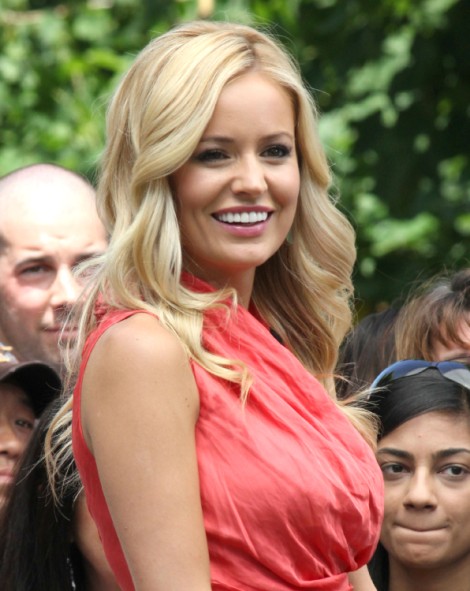 This girl has a type, doesn’t she? Just weeks after calling it quits with her fiance of five months, Jef Holm, The Bachelorette beauty is hooking up with truck racer, Jason White. Emily Maynard’s new boyfriend races for Nascar just like her late fiance, Ricky Hendrick. She was also linked to Dale Earnhardt, Jr. in 2006. She sure makes her way around the oval, doesn’t she?

And she sure isn’t keeping this new romance a secret out of respect for Jef’s feelings. Us Weekly reports: “They were all over each other,” a source said after seeing the new couple at a Carrie Underwood concert in Charlotte, North Carolina. “Jason guided her through the crowd and held her hand as they walked downstairs.”

Apparently no one’s surprised by her break-up with Jef and her return to dating athletes. “Emily tried something new, dating Jef,” said a pal. “She is going to go back to what she knows and considers safe.”

Yes  because dating men that could potentially die every time they race is super safe. But, whatever. I never get a good vibe from this chick. It just seems obvious as all hell that she used the show to increase her exposure and date high profile dudes again. There were also all those rumors that she was cheating on Jef with Matt Leinhart. Jef never stood a chance! Homeboy co-founded a sustainable water bottle company. That’s probably sexy to some girls but even I could have told you it wouldn’t be to Emily Maynard. You can take the girl out of Nascar but you can’t take the Nascar out of the girl.

What do you think of her new relationship with Jason White? Is Emily Maynard dating again too soon after her failed engagement? Is this girl just straight up trashy?