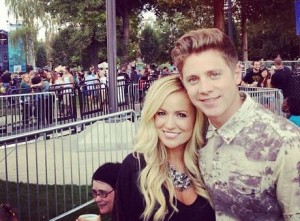 Jef Holm’s ex-girlfriend Kaylee Shepherd is now causing a little bit of controversy for her reality star ex boyfriend. And there are even rumors that Holm and his ex are secretly hooking up behind Emily Maynard’s back. But does that mean he’s cheating? So what is the truth?

All we know is that according to Radaronline.com, that big fat alleged sexting scandal that Emily Maynard engaged in last month had Jef looking for comfort and it was his ex whom he turned to. A source close to Shepherd told the website that, “Jef has been calling and texting his ex-girlfriend for months and she ignored him for a while but just last night they met up.”

Well that’s all fine and dandy but does that necessarily mean they are hooking up? A “date” at Burger King doesn’t exactly mean romance. I mean it COULD, but highly unlikely. Okay, whatever. Moving on.

At any rate, Jef supposedly confided in his ex telling Kaylee that he thought he fell in love, found the “one” in Emily but things have since changed. And now he is supposedly only staying with Emily because she PAID him to stay and wanted to look good in the media despite not wanting to really be with the guy.

I’m telling you peeps. It’s only a matter of time and somebody ends up knocked up, somebody’s tooth gets knocked out or someone gets a butchered up haircut. What do you think? Is Jef Holm’s ex-girlfriend Kaylee Shepherd looking to stir up trouble or is she just trying to unveil the truth? Leave your comments in the space below.