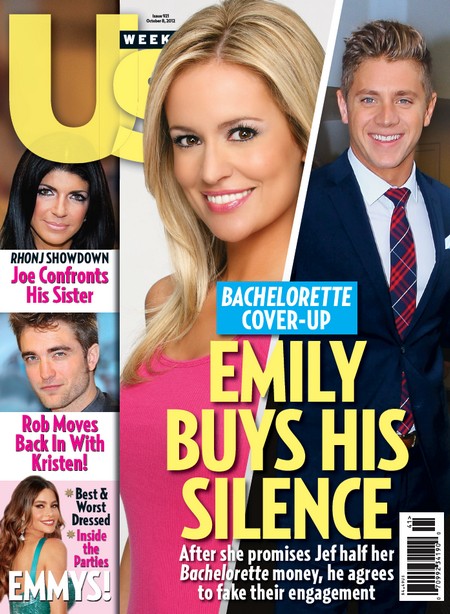 The latest cover of Us Weekly presents us with the flashing smile of Emily Maynard, interspersed with the Banana Republic doll face of Jef Holm from the previous season of The Bachelorette. The tag-line reads, “Bachelorette Cover-Up. Emily Buys His Silence: After she promises Jef half her Bachelorette money, he agrees to fake their engagement.” Oh poop! Isn’t this just the biggest conundrum since the invention of science? Teresa Giudice from Real Housewives Of New Jersey peeks around the corner with her salmon-faced eye-split as the tag-line reads, “Joe confronts his sister.” Uh-oh! We once confronted our sister about the missing candles in the foyer and she merely muttered, “I ate dem. Derp. Burp.” Will Teresa be saying the same to Joe Gorga? Will the RHONJ scandal be the biggest scandal of all?

Robert Pattinson is just below the horrific façade of Teresa Giudice and the man with the soft eyes is led along with the tag-line, “Rob moves back in with Kristen!” Stewart that is. How is Rob able to move back in with the biggest idiot since Brian Dunkleman? Kristen Stewart doesn’t need a sparkly vampire to show her that she’s useless – she is able to do that all on her own. Let her crawl Robby, let her crawl! The best and worst Emmy dresses will be shown in all their glory (yellow is in this season) and there will also be an after party scoop by the Us Weekly journalists! We have to know, is Claire Danes truly that beautiful in real life? A most underrated actress!

We’re rather excited about The Bachelorette scandal, because we all know by now that the show is wrought with dramatics of rose ceremonies and the most fame whoring this side of the solar system (that Pluto bitch took all the shine for so many years, until she was kicked to dwarf planet status by Bruce Jenner – he intercepts our mail too, but don’t tell anyone, we might be locked up in a mental ward for good this time) Emily Maynard has been rather quiet as of late, so a brand new expose and cover might give add an extra second to her 15 minutes of fame!

Check out the latest issue as soon as you’re done staring at the boy band eyes of Jef Holm (OMG! He looks like Niall Horan’s older brother!)