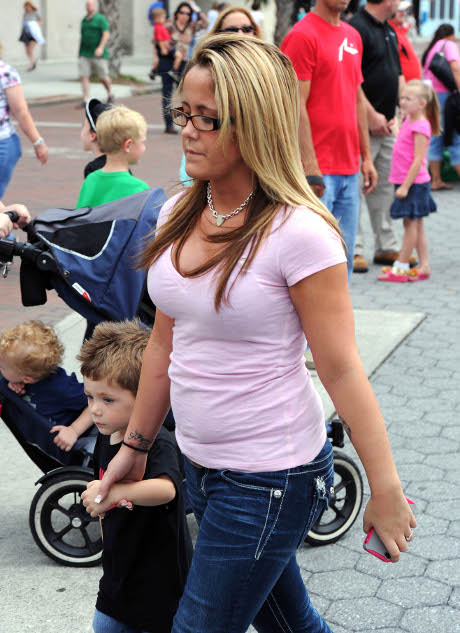 Last night, Jenelle Evans of MTV’s Teen Mom 2 fame posted a photo on Twitter, with the caption, “Damn I’m loving PINK tonight lmao.” What Evans probably didn’t notice (or did she? I wouldn’t put this past this girl to have done this on purpose) is that one nipple was on display. Her super tight tank top couldn’t contain her new saline-enhanced boobs.

When a follower asked the obvious question, “what the heck is wrong with your boob”, Evans explained, “One boob was popping out and the other was covered up.” Um, no, sweetie…what I think that follower was really asking is, how come one boob looks like it’s sitting on your collarbone and the other looks like it’s heading south for the winter?

Considering the history of Evans, this actually isn’t that big of a deal. From what her past was…well…let’s have a rundown of all the fun stuff Evans has done!

Pregnant at sixteen. Kicked out of mom’s house for smoking weed. Losing custody of son (actually, signing over custody because she’s an unfit mother — pretty much the same thing). And being arrested multiple times, for things like-breaking and entering. And for assault. And for stalking. And for drug use. And for cyber-bullying. Whew! This Teen Mom 2 star should just have a revolving door installed at her local jail.

Now, technically, this isn’t the first time the nation has been graced with Evan’s areolas. Back in May, her ex-boyfriend, Kieffer Delp, sold nude photos of Evans to RadarOnline. They were a series of photos where Evans posed nude before her boob job, and more photos of her posing after her boob job. Why she trusted Delp to take these photos and to keep them private is beyond me. Just like Evans, Delp hasn’t been the most reliable or stable minded person. He’s a frequent drug user and was the reason they both were arrested with that breaking and entering charge. Who’s betting that he sold those photos to get money for drugs? I’d win that bet.

When will these teen moms ever learn? What do you think of Jenelle Evans’ boob pic?