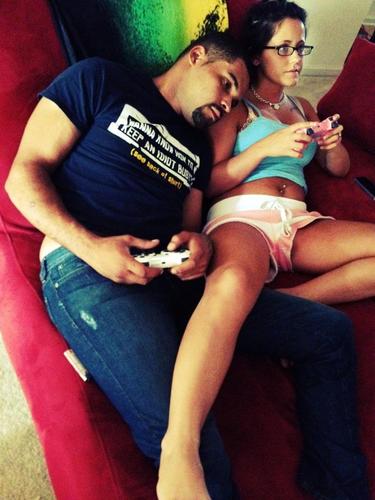 Judging by the smiley face, followed by the words “Remember, you left me,” she doesn’t seem to sad about it. It almost seems like her way of saying, “You dumped me, this was your choice, so don’t guilt trip me about it.“

It did come as a bit of a surprise, though, because hours earlier, Kieffer Delp tweeted expressions of his undying love and devotion to Jenelle, and vice versa.

Now, Kieffer has been tweeting several emo messages of heartbreak.  “Ging to bed crying hope [you’re] having fun. I bled [you] dry? no [you] bled me dry cuz i would rather be broke than have hurt feelings,” tweeted the apparently upset 22-year-old.

At one point, he was so down that even apologized to Jenelle’s ex-fiancee, Gary Head. “To Gary Head,” he wrote, “I [don’t] know if [you] will see this [but you] were right. I apologize.“

Gary was receptive. “In response to Keiffers tweet: No hard feelings. We both know she’s CRAZY and as a man you can only deal with so much. Good luck with life,” replied the 24-year-old Afghanistan veteran, who is still currently in the military.

So does Gary miss her and want her back? “Hell no!!!!” he says. “I don’t EVER want to see her agian. I’m ready 4 this court shit to be over honestly.“

Today, things seemed to have calmed down a bit, and Kieffer says, “I love [you] at times, I hate [you] at times. I wanna [be] with [you] but shit is gonna change.“