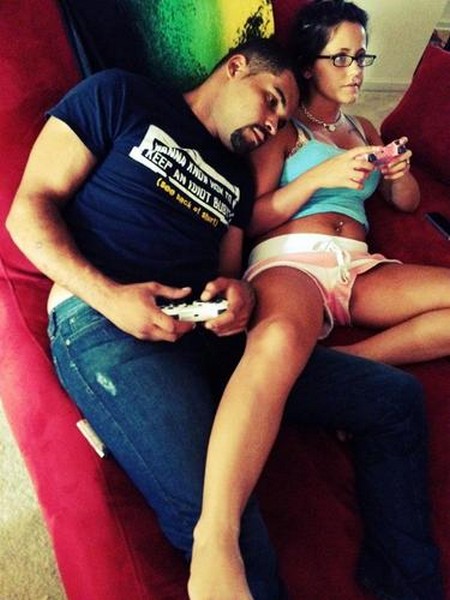 Teen Mom 2 star Jenelle Evans really does like to learn her lessons the hard way, doesn’t she? On/off again boyfriend, Kieffer Delp seems to be back in her good graces and everything points to a reunion between the two.

Kieffer changed his Twitter profile pic to one of the twosome curled up together on a chair.  They absolutely look like a couple but both are knee deep in public denials, saying that they are just “friends”.  Jenelle has dropped hints that they are together via her twitter.  Over the weekend she said,

“Did some serious cleaning today with help from the best <3 :)”  Kieffer has in the past copped to enjoying helping Jenelle clean.

I know that Jenelle is kind of an anything goes type of girl, but still, I’m surprised she would go anywhere near him again.  Things got very ugly between the couple after she dropped him the last time.  Back in May, Keiffer got the ultimate revenge by selling naked photos of Jenelle to a tabloid and then threatening to post even more graphic stuff to his twitter when she lashed out at him.

“Keep talking [expletive] I will upload a pic of yur fingerin yur but lmao don’t start with me,” said the jilted Keiffer.

Obviously, they are a great match and with Jenelle’s upcoming court dates she will be needing support from someone.  Last month Jenelle was arrested for (among other things) possession of a controlled substance (marijuana) and simple assault in connection to a fight with ex, Gary Head.

This girl’s life is a mess.  It’s pretty sad when the guy that betrayed you by posted naked photos all over the internet looks like a rock to hang onto!

Do you think Jenelle really took Keiffer back and if so, is she playing with a full deck?