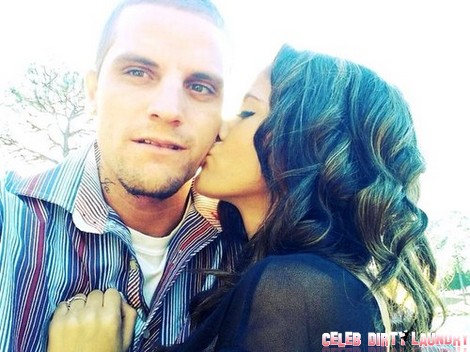 The embattled Teen Mom, Jenelle Evans, was committed into a Winston-Salem, North Carolina mental health facility for drug abuse. Her older sister, Ashleigh Evans Wilson, told Star magazine, “Jenelle was transferred that weekend [Thanksgiving] to Old Vineyard Behavioral Health Hospital for purposes of emergency rehabilitation.” According to reports by RadarOnline, Jenelle’s mother, Barbara Evans, decided to intervene when she noticed track marks on Jenelle’s arms and witnessed Jenelle abusing the dangerous drug. Ashleigh continued, “My mom first realized Jenelle was doing heroin when she walked into her house a month ago and saw her shooting up.”

Only recently – about 24 hours ago – Jenelle married Courtland Rogers in a whirlwind, shotgun wedding, but the startling new revelations might be the reason behind her erratic behavior over the past couple of months. According to Jenelle, she was never treated for heroin addiction and/or abuse; instead, she alleges, that she was treated for ovarian cysts at a facility near Wilmington, North Carolina. She wrote on Sulia, a social networking site, “I was in there for 8 cysts on my ovaries… the ambulance came to my house and got me. After going to one hospital I had to be transferred to a bigger one 4 hours away from my home.”

However, a source for Star magazine contradicted Jenelle’s wording and alleged that she witnessed, with her own eyes, how Jenelle had to suffer through withdrawal symptoms at the facility. At the time of writing this article, there’s still no word on whether Jenelle was involuntarily committed to the Old Vineyard Behavioral Health Hospital or not, but we do know that Jenelle has a bit of a history with illegal drug usage. After all, the relapse rate of a heroin user is about 95%.

Jenelle’s struggle with drugs isn’t her only concern. Her husband, Courtland, was not only involved in a car accident over the Thanksgiving weekend, he was also charged yesterday, hours before their wedding, with “obtaining of property by false pretenses,” a felony in North Carolina. A source revealed, “Everyone is worried about Jenelle. And her appearance and actions on Tuesday did nothing to quell the concerns.”