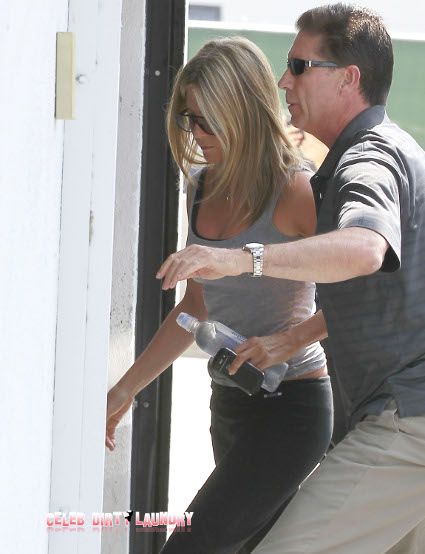 Jennifer Aniston was caught exiting a gym yesterday after a strenuous Hollywood star workout with a cell phone in hand and a disgruntled look across her face — reports are saying that the person on the other line was current boyfriend Justin Theroux.

This Hollywood couple has been scrutinized more than Justin Bieber’s underwear and many pundits believe that the year long relationship is quickly heading for disaster. Word on the Hollywood street is that Jennifer Aniston is clingy, demanding and that she has been suffocating Justin. Jennifer allegedly wants Justin to sell his house in Hawaii and he hates Los Angeles, so such a move would create atomic friction between the two. As reported here on CDL recently, Jennifer is relocating to London for a few months, in order to do a film there, staying in the same area as soon to be wed Brangelina. It seems Jen will do the big move all on her own and that Justin won’t be there to keep her warm at night.

The couple was recently spotted dining at Chateau Marmont, but as we all know here in Gossip Land, that does not symbolise an amicable relationship. In a May interview with Now Magazine, Justin did a shout out and said, “I’m not good enough for Jen.” If speculation is to be believed, Justin and Jen are not good for one another, as rumours are rife on the internet that their relationship is at breaking point.

Will Jen’s infamous man-eating nature subside with Justin? Will they be able to work out their troubles soon? Or has this couple sung their swan song?

Whomever you believe, one thing’s for certain, JenJust might be JustJust done.