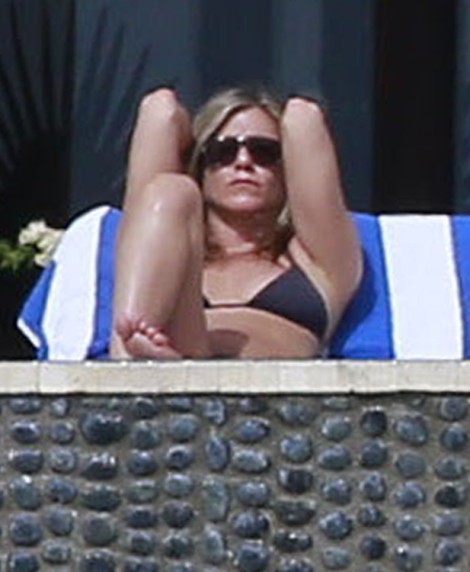 I know, this seems almost too good to be true from a gossip perspective but hear me out. Jennifer Aniston’s been in Cabo with Justin Theroux for the last several days now and famous friends have been trickling in to join them. Emily Blunt and Jon Krasinski are there along with Jimmy Kimmel and his girlfriend. George Clooney is also supposed to be around with Stacy Keibler. It got me thinking… what if this was her big/little secret wedding? It’s her favorite place and she could tell everyone it was just a New Year’s Eve Party but turn it into a last minute wedding. And I wasn’t far off because OK! magazine had the same idea but it reported Jen canceled the wedding last minute because the media found out although I haven’t seen much proof of any Jen Aniston wedding talk.

True, it could just be tabloid rumor nonsense but what if it was partly true? I woke up to more Angelina Jolie/Brad Pitt wedding rumors this morning. I know! I know! There are always rumors but these sorta make sense. Along with their 12 nannies, Brad and Angie brought 22 family members along on their Turks and Caicos vacation. Unlike Jennifer and Justin, paparazzi can’t get close to the couple and there have only been sightings of the famous family on the island by other visitors. Could this be it? I know everyone speculated they would get married in their French chateaux but Turks and Caicos is awfully nice too. I’m getting a funny feeling….

So did Jen and Brad have the same idea? Did they both envision a New Year’s Eve wedding but the second Jen found out she pulled hers? That would be the smart decision. How infinitely embarrassing to get married on the same day and, naturally, everyone would say Jen was copying because that’s how it works in that relationship.

I actually believe the Brad Pitt wedding over the Jennifer Aniston idea. Cabo makes sense for Jen but where are her girls? Where’s Sheryl Crow and Courteney Cox? Jen wouldn’t get married without them, right? But Brad… Brad could pull the trigger tonight. He and Angie have both had previous weddings and have already said they are doing it for their family. Do you have a funny feeling too or could this be another false alarm? Did Jennifer Aniston cancel her wedding because of Angie and Brad or is not the right time yet?