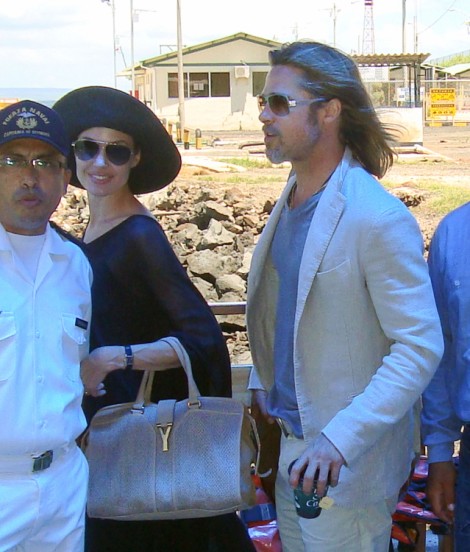 Brad Pitt and Angelina Jolie have been spotted! The couple along with their six kids and Brad’s mom Jane are staying at designer Donna Karan’s house on Turks and Caicos. The secluded pad is uber private with a white sandy beaches as well as an infinity pool, screening room and yoga spa. I couldn’t be more jealous right now. It’s so cold and snowy in Colorado which is how it’s supposed to be I guess but I have to keep taking my dogs out because their paws get too cold to be outside longer than five minutes at a time. They’re super lazy but I can’t help but feel for them when they lift a shivering paw and stare at me with those disconsolate pug eyes.

ANYWAY, according to Page Six, the Brad Pitt/Angelina Jolie Christmas isn’t too solitary on the island. Keith Richards, Christie Brinkley and J.J. Abrams are also there along with Brad and Angie’s 12 nannies! Yes, you heard me. TWELVE NANNIES! Why do kids needs two nannies each if their parents and grandma are there? What are Brad and Angie doing with all their time – destroying sex tapes?

In all honestly though, I know six kids is a lot but come the ef on! My grandma has six kids, and believe me, I’m not saying that crazy German woman raised them all right but she did a pretty good job (luv ya grams!). And I’m sure you have grandparents/great grandparents who did the same. But still, this isn’t a pissing contest. Everyone’s entitled to nannies – especially the sensationally rich and traditionally royal but I can’t help but think two per kid is just a little excessive. Are there so many because Angie and Brad want the kids to have someone to give them extra special attention? Isn’t that what parents are for? I understand hiring nannies for diaper changes and sippy cup refills but their primary job responsibilities shouldn’t be more than the parents’, right? Or was I just raised to middle class poor to understand how these things work?

What do you make of the Brad Pitt/Angelina Jolie vacation? Is 12 nannies a bit too much? Where are these infamous nannies when Angelina does her photo ops with kids in tow outside toy stores? Oh, no Angelina wouldn’t stage a photo op would she?