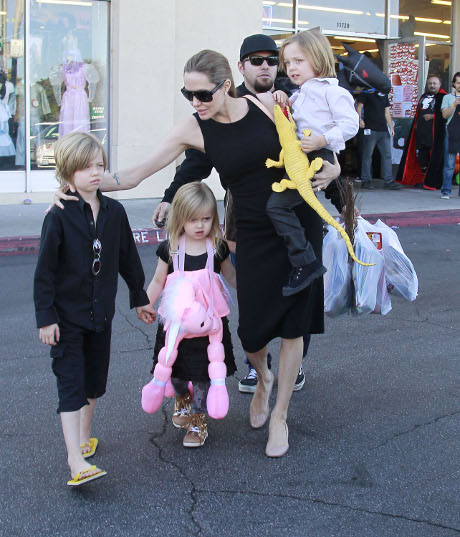 Most daughter-in-laws don’t get along with their mother-in-laws at all. It’s a fact of life — and it turns out that Angelina Jolie’s relationship with Brad Pitt’s mother is no exception. There’s always constant hurly-burly and a pull of power between the two.  According to Now magazine, Jolie and Brad Pitt’s mother, Jane, are at odds once again.

Allegedly, Jolie is refusing to spend Christmas in Missouri with Brad Pitt’s folks, and this has made the family more pissed off than Bruce Jenner at an anti-Botox march. A source close the family reveals, “Jane finds it rude and insulting, as do the rest of his family.” This comes at a difficult time for couple, as they are currently involved in the wedding plans for their upcoming nuptials.

Detailed information on the nuptials have not yet been released, but in September Pitt said, “No plans yet. Other than, we’re gonna do it.” The couple has been rebelling against the institution of marriage, as they wanted gay marriage to be legalized in every state before they decided to take the leap as a couple. Obviously, this has not yet happened, but the couple took the plunge anyhow.

Their upcoming wedding has been touted as “the wedding of the decade”, and whilst we would like to believe this, we do have a sneaky suspicion that the commitment phobic Jolie and family oriented ex-cheater Pitt will still experience several hills and valleys before they stand at the altar and promise to love one another until death does them part. We’re hoping the eventual ceremony will go down without a hitch, but this isn’t our first day at the ball park – if Pitt’s mother is acting like a monster-in-law now, how will she act once the ceremony is completed and she’s fed a bottle of champagne? It won’t be a pretty sight. What do you think about Brad Pitt and Angelina Jolie’s wedding?