Jennifer Aniston Fears Justin Theroux Will Cheat Like Brad Pitt, Refuses To Leave His Side 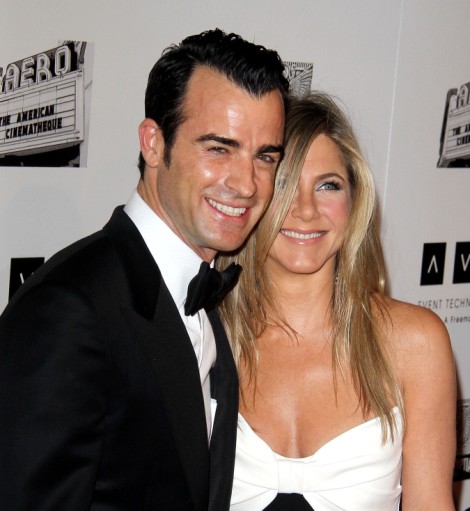 Jennifer Aniston is dropping movies left and right all so she won’t have to leave fiance Justin Theroux’s side. Maybe she finally realized that the majority of movies she signs on for suck anyway? Or maybe she’s learning from her past mistake and not letting her significant other stray too far away. You know… in case Angelina Jolie is sniffing around.

Of course she’s telling everyone her reluctance to stay away from Justin and work on the ironically titled “Miss You Already” in London has more to do with wedding planning than cheating insecurities.

“There were personal reasons,” says a movie source. “She has to prepare for her wedding. Justin is staying Stateside and she doesn’t want to be away from him. The film company was also unable to find the right British actor to appear alongside her.”

I’ve heard Jennifer was clingy but this is a little ridiculous. She’s pulled out of two movies for this guy now. Maybe she’s over it. Maybe she just wants to be happy and get pregnant (which would explain why she doesn’t want to stay away. Ovulation only happens 1-2 days out of the month after all). But do you picture Jennifer as a bridezilla? I never did. I always thought Brad was in charge of their last wedding and she just went along with whatever he wanted. Perhaps Justin couldn’t care less so he’s forcing Jennifer to actually stop toking on the couch long enough to come up with a theme and she’s probably frazzled by all the details. No wonder she can’t work at the same time!

Still… I always have a weird feeling about people who can’t travel apart or spend any time away from each other. It’s not normal. They’ve been together for two years. Leave him be for a couple of weeks! On the other hand, London is far and it’s not like Jennifer needs the money. At this point it almost seems like acting is just something Jennifer does to pass time when she’s not laying out in Mexico. Now that she has Justin to occupy her, she doesn’t need the huge paychecks and horrible reviews. As long as he doesn’t mind the ball and chain following him from set to set then have at it Jen!

Do you think Jennifer Aniston fears being away from her fiance? Would Justin Theroux cheat while away at work? I doubt it. He’s got too good of a thing going. Still… you can’t harp on the girl for having those kind of worries.