Jennifer Aniston Bans Justin Theroux From Guy’s Weekend – Too Clingy Or Too In Love? 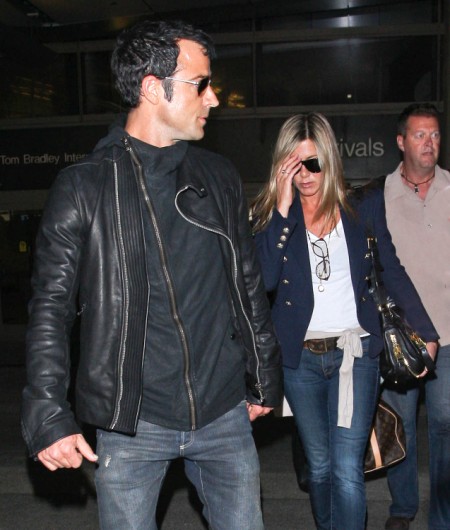 Jennifer Aniston has been flashing her nipples and gorgeous legs in Wilmington, North Carolina, where she’s been playing a stripper in her new movie, We’re the Millers, but she took time out from her busy street walker schedule to play the doting (and nagging) girlfriend to Justin Theroux when he flew in to celebrate his 41st birthday.

People magazine reported that Jen and Justin went out for dinner with co-stars and friends on July 31 for Justin’s b-day. Apparently Courtney Cox tagged along as well as Laura Dern. Geez, I bet there were some sad sack stories flying around that table as the wine flowed. None of those women has been lucky in love recently. Anyway, People said they spent the night laughing (probably ended it crying) and generally had  a great time. Boring. Whatever.

The always questionable yet entertaining, Now magazine, came out with something much more fun:

But Jen, 43, has banned her lover from going on his annual boys’ weekend in Hawaii – prompting his friends to say he’s “under the thumb”. A source reveals: “Jen’s inisiting that he wait until the end of summer when she can join him on the trip. Justin isn’t happy about it all, but he’s agreed to stay in NYC ’til then. Now his pals are teasing him.”

Oh no! Justin’s friends are teasing him! Are they teasing him about the worldwide exposure and increased popularity he’s received since hooking up with the former Mrs. Pitt too? I think most people could get used to a leash if it was covered in diamonds.

But this story just makes me laugh. I don’t care if it’s true. That’s never the point people! The point is the image that’s being projected onto Jen that she just can’t shake. Jen is needy. Jen is clingy. Jen would rather tweak her nipples, blow out her hair and go on vacations that require bikinis rather than have babies and save the world like earth mother extraordinaire Angelina Jolie. It’s telling. She just can’t shake the stage four clinger rap.

Does she care? She has said no. I would guess yes. How could she not? What do you think? Will Jen ever lose the reputation for being needy and controlling in her post-Brad Pitt world? What needs to occur for that to happen? Baby? I think baby. Her image could use a little softening. The Dr. Martens, leather jackets and rolled jeans aren’t helping anything!