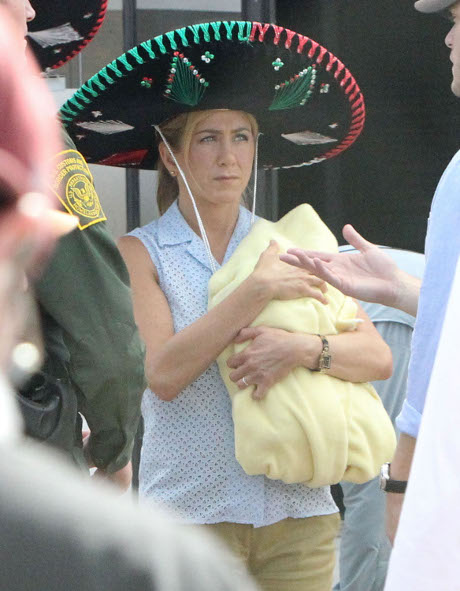 Justin Theroux and Jennifer Aniston‘s marriage has been the most talked about event since the moon landing (at least the moon landing was real), but this event won’t be “one step for man, one giant leap for mankind.” In actual fact, this event will set mankind back a bit, because anyone who dates Jennifer Aniston is eaten by a black hole and their careers are torn apart at the limbs. She has dated more men than Kris Jenner and Gene Simmons combined, but finally found a serious and loving partner in the chiseled face Theroux. According to Now Magazine, Jennifer is still being a demanding bitch.

A new report reveals that Theroux is in the dog box with Aniston. He allegedly invited his ex Heidi Bivens to their wedding and Aniston burst her own bladder on the $1 million carpet when this little tidbit was revealed to her.  According to a source, “He must’ve had a ‘brain fade’ moment. Jennifer hit the roof when she saw that he’d put Heidi on the guest list. Justin argued that Heidi’s been part of his family for many years. Jen snapped back saying she was going to invite her exes Brad Pitt, John Mayer, and Vince Vaughn.” Remember Theroux, hell hath no fury on an Aniston scorned.

Aniston is creepy. Why does she always have to be a bitch about everything? Can’t she be a normal famewhore like Katie Holmes and build a cardboard tunnel? Why does she always have to make a mountain out of a molehill? The poor Theroux must be so terrified of her that he hides in the oven when she comes home from her She-Devil rampage during the day. She most probably storms into the house, throws down her keys, and screams, “Come play with mama bitch!”

Do you think Aniston is cray-cray? Do you think Theroux’s head should be bitten off due to a moment of emotional blindness? Should they get married? Let us know in the comments below how much you despise us for calling Aniston a She-Devil!