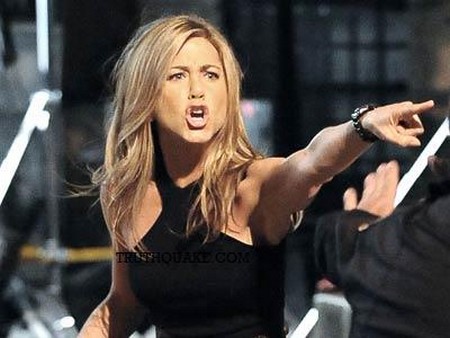 Jennifer Aniston is angry at Cameron Diaz. Why? It seems Cameron Diaz stole Jennifer’s role in the Coen Brothers remake of Gambit.

Remember Gambit? The 60’s film with Shirley Maclaine and Michael Caine? We don’t either, but don’t hate, no-one really remembers the 60’s too well with all the happy pills.

Colin Firth and Cameron Diaz star in the remake produced (not directed) by the Coen Brothers. Star magazine claims that Jennifer Aniston was originally up for the role, but Cameron Diaz beat her to it, like a real-life game of Battleships.  “Jen believed that Cameron stole this part from her, plain and simple,” says a source close to the A-list actress. “Jen spent the better part of five years campaigning for the role of PJ, a beautiful but nutty rodeo queen. But she took too long deliberating over the terms and in swooped Cam. Now Cam is getting rave reviews, and it’s really bugging Jen.”

The source adds, “Jen is very insecure about her looks, but her sense of humor is the one thing that she can always fall back on when she’s comparing herself to other women. When Brad left her, it always made her feel better when friends would say, ‘Angelina’s not funny, there is no way she can make him laugh the way you did.’ But Cam has the looks, the body and the sense of humor.”

Shame on you Cameron for making Jennifer feel like a teenage girl who has too many braces and a penchant for sniffling! We’re placing our bets on Jennifer Aniston going completely psycho one day and using a homeless person’s dentures to crush Cameron’s Hollywood face.  Meh. It would be funny.

Let us know in the comments below if you think there’s any truth to the story.