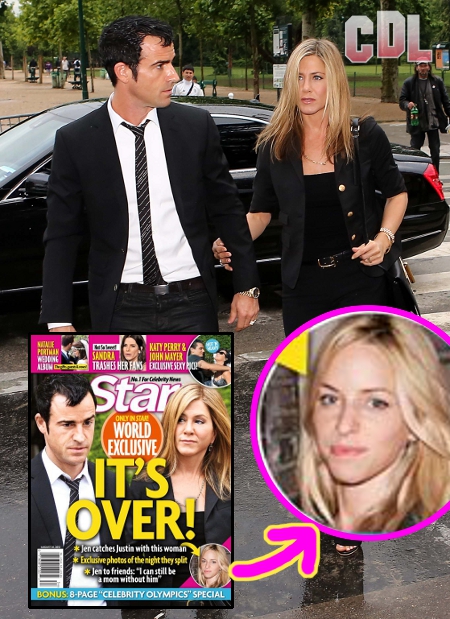 Poor Jennifer Aniston has trouble keeping men in her life. Now, according to a newly released Star Magazine cover, Jennifer Aniston walked in on Justin Theroux while he was with another woman! Does this mean it’s officially over between the two? According to the magazine, with a headline that reads “It’s Over!” between them, that seems to be the case. It looks like Jennifer better find herself a new financial manager, preferably one that won’t cheat on her in the future.

Apparently, if the magazine got this unfortunate incident correct, then Jen and Justin split a few nights ago and Star Mag has photos of the apocalyptic event. Her friends are wondering if she can still be a successful parent without her man, who we all thought was Jen’s soulmate, and she said absolutely. “I can still be a mom without him,” reads the quote on the mag’s front cover. We know Jen is a strong woman, but when is the universe going to cut this celeb a break? We don’t know the name of the person Justin cheated with, but the mag does have a picture of her, which can be seen in our featured photo above. It was probably another housekeeper *sigh*.

We’ll definitely keep you updated as we get more news about this tragic split. What’s in the Hollywood air these days? First we get a nasty cheating scandal between Kristen Stewart and Rupert Sanders, and now we get this tragedy! Yikes. I’m going to need therapy to help me cope with all this emotional trauma.

Make sure to grab a copy of this August 20th issue when it hits the shelves. Other hot stories in this issue include the following: John Mayer and Katy Perry‘s budding relationship, which includes several steamy photos; a story that suggests Sandra Bullock isn’t necessarily America’s sweetheart; and a glimpse inside Natalie Portman‘s wedding album. All right, in light of this Jennifer Aniston Justin Theroux split, let’s all go cry now.