Jennifer Aniston Knows Her Marriage With Justin Theroux Will Fail 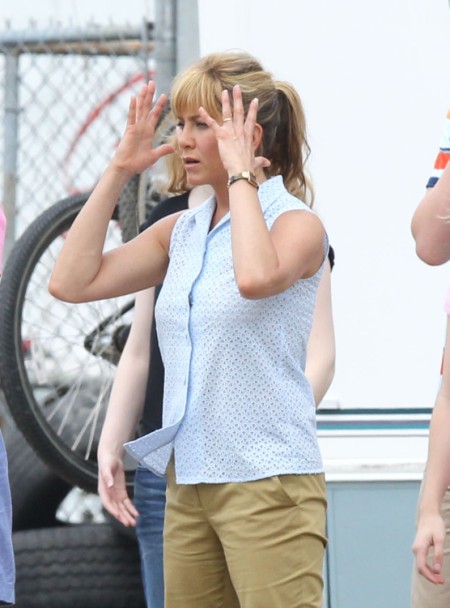 Jennifer Aniston might be unlucky in love but at least she’s not a stupid romantic. She had one little, tiny condition for Justin Theroux when he surprised her with a proposal last weekend. He had to agree to a prenup. Jennifer Aniston is worth around $120 million and the National Enquirer reports she isn’t about to let Justin walk away with all her hard-earned cash from all those romantic comedy flops.

“Jen is determined to protect her fortune in the event that they split,” said a close source. “She’s working feverishly with her lawyers to hash out the prenup so she and Justin can marry by the end of the year. Then they plan to start adoption proceedings so they can bring home a baby in 2013. Jen has found her romantic happy ending at last. But she’s been around the block enough times to know that she has to be realistic. God forbid this marriage fails, but if it does, Jen at least wants the security of knowing she won’t be wiped out financially.”

Damn straight! Protect that money. I’m not a huge fan of prenups. They do sort of leave an odd taste in your mouth when you’re shackling yourself to someone for eternity, but when there’s that much money involved, you’d be an idiot not to create a safeguard. Anything can happen. People change. If anyone knows what it feels like to think they’re in a happy marriage only to have the rug pulled out from beneath them it’s Jen.

But what about the baby news? The Enquirer just sort of hid that little tidbit in there. Jennifer Aniston to adopt? I wonder if they’ve been trying this last year. Weren’t there pictures of her mysteriously leaving doctor’s offices and people speculated she dropped smoking to ready her temple for a babe? She’s 43 so perhaps she gave it a year and after no luck is going to move forward with adopting. Good for her but that’s even more incentive to pack that money away.

Do you get the feeling Jen is settling for Justin because she really wants a baby? If it’s going to happen, it has to happen soon, adoption or not. I kind of get the vibe that Jen has had her great love with Brad Pitt and has been around the block and knows how the world works now. I’m not saying she doesn’t love Justin, but she’s going into this marriage with her eyes wide open. That’s what age does to you. Some might say it’s a benefit to growing older. I just can’t get the pic of her beaming at Brad on their wedding day out of my head. She was so happy. By the way, she did not have a prenup with Brad. They were both worth a fortune then too. Why is she hedging her bets here when she didn’t the first time around? No doubt she’s being sensible but where is the place for sense when you’re madly in love with someone? I’m sure a lot of you just rolled your eyes. That was a young person on her first marriage who doesn’t have millions thing to say.

Do you think Jen has reservations about her marriage to Justin or is she just making a smart business decision now that she’s older and wiser?