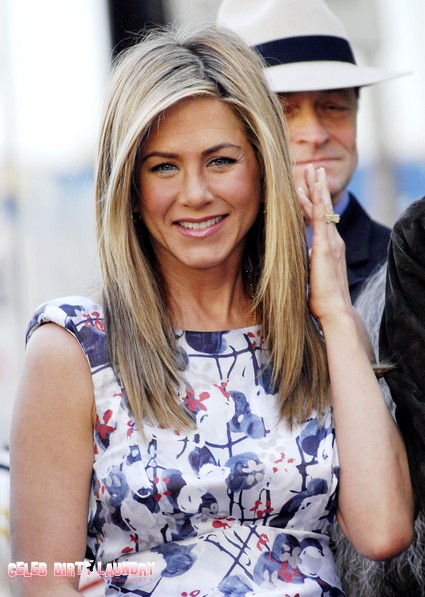 Jennifer Aniston is promising “a lot of penises” and “breasticles” in ‘Wanderlust’ as she spoke with comedian Chelsea Handler.  Jennifer stars as a woman who decides to quit her normal life and head to a nudist colony in the new romantic comedy and assured viewers they will get to see plenty of naked shots of her and her co-stars. This however is doubtful as we reported yesterday on celebdirtyluandry that Jenifer has insisted her topless scenes be pulled from film.

Jennifer told Chelsea:  “There’s a lot of penises in this movie!  Finally, for once, the men have to disrobe!  Trust me, there is your fair share of breasticles as well.  Penises are promised.”

Chelsea also remarked to Jennifer:  “I’ve been lucky enough to see you topless in our private life, but now America, when they go to see the movie, will get to see her topless running!”

Why has Chelsea seen Jennifer topless and why does that make her lucky? Is Chelsea a lesbian?

Jennifer replied: “There’s a lot of nudity.  And a lot of slow motion action nudity!  I wouldn’t go to see a Jennifer Aniston movie if it was free and came with free snacks.

Jennifer is dating Justin Theroux and he also appears in the film. No doubt he got the job because Jennifer insisted upon it. Rumor has it that Justin’s salary more than doubled when he started dating Jennifer!

Jennifer has previously admitted she was nervous when she prepared for her nude scenes, but quickly got used to it.

Jennifer said:  “There was a little bit of nerves, but adrenaline takes you through it.  And then, you have the girls come in and cover you up, immediately. But I got very comfortable with seeing nude people, pretty much immediately.  Shockingly, it was bizarre how at ease we became with having a bunch of naked people everywhere.”