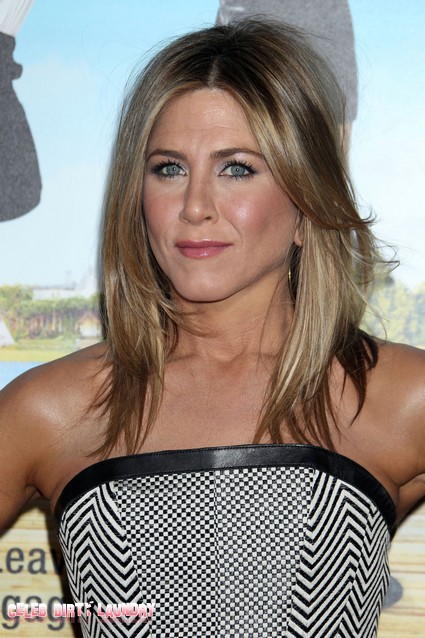 Jennifer Aniston is getting a reputation for being a big tease as she has pulled the topless scene for the general release version of her new film ‘Wanderlust.’ This is not the first time Jennifer has put out the bait and then not delivered the goods. The Aniston publicity crew was up to its usual tricky business with ‘Horrible Bosses,’ promoting Jennifer’s topless scene in this film. Of course Jennifer does have a topless scene in ‘Horrible Bosses’ but the tease keeps her arms strategically folded so that you can’t see her important parts!

In ‘Wanderlust’ Jennifer manages to star in a film about nudists without appearing nude. How stupid can Hollywood get? Perhaps a better question is how pathetic will Jennifer’s fans get as they flock to another one of her lousy films? Anyway, Jennifer makes it seem in the interview below that she had the scene pulled because of her great love and respect for Justin Theroux and her own discomfort. What happened to her modesty when she posed nude for GQ and Rolling Stone?

According to Radar:  Did Jennifer Aniston have producers cut out a nude scene from her upcoming movie Wanderlust for the sake of her new relationship?

According to The Wrap: The actress, who just turned 43, is so smitten with her hunky beau Justin Theroux that she only wants him to be able to see her naked — so she had a scene where she flashed her bare breasts taken out of the movie.

The Friends star reportedly had her topless scene changed, so when she flashes TV news cameras instead of seeing her breasts au natural they now are shown pixilated.

According to a source: “When the film was edited with the frontal nudity in it, Aniston pleaded for an alternate version due to her blossoming relationship with Theroux, whom she met on the set of the film. (The two are now cohabitating.)”

A Universal spokeswoman denied that Jen had her topless time changed, saying, “The scene was shot a bunch of different ways, and we have the best possible version.”

Jennifer Aniston remains one of the great mysteries in Hollywood. She has zero talent and only marginal good looks and yet she is always the talk of the town and millions flock to see her silly romantic comedies. It’s a miracle that she was ever married to Brad Pitt – thank goodness Angelina Jolie came along and saved him.