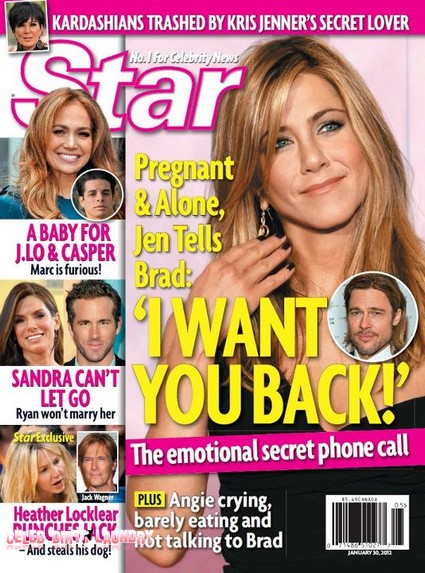 The cover of this week’s Star Magazine is loaded with shockers! The lead story is that a desperate Jennifer Aniston is pregnant and alone after supposedly being dumped by Justin Theroux and has consequently appealed to Brad Pitt to come back to her. Of course we do believe that Aniston could be pregnant as all evidence points in that direction and we just posted a story saying that it could be true.

As far Theroux and Anistion splitting up, last week In Touch said: Jennifer Aniston thought she’d be ringing in 2012 engaged to Justin Theroux — but instead, Jen, 42, nearly lost him forever. Days before New Year’s Eve, Justin, 40, stormed out of their New York apartment after what turned out to be their biggest fight — and friends are now wondering if they will ever recover from it.

But the big problem with Star’s story is that Pitt and Angelina Jolie looked incredibly happy at the Golden Globes… forget it Jennifer, Brad is taken for good!

Next, Star claims that Jennifer Lopez is pregnant with her boytoy Casper Smart’s child and naturally Marc Anthony is furious. Of course this is entirely possible but there is nothing about J.Lo that suggests that she is looking to have another baby in her 40’s. In fact she seems to be acting as if she were a young chic – far from motherly.

Star also has the usually thrust on the cover about Sandra Bullock pining away for Ryan Reynolds. Been there, done that… .

With ‘Heather Locklear punches Jack Wagner and steals his dog’ Star is entering the ‘who cares’ department.

Right at the top of the cover we see ‘Kardashians Trashed by Kris Jenner’s Secret Lover.’ We have to ask – which secret lover – Kris has had so many. Could be O.J. Simpson as he claims to be the father of Khloe Kardashian as we reported today.

Of course before we dismiss any of this week’s claims out of hand let’s keep in mind that Star broke the Mariah Yeater/Justin Bieber scandal – and as unbelievable as it seemed at first, their reporting on Mariah’s claims was right on.