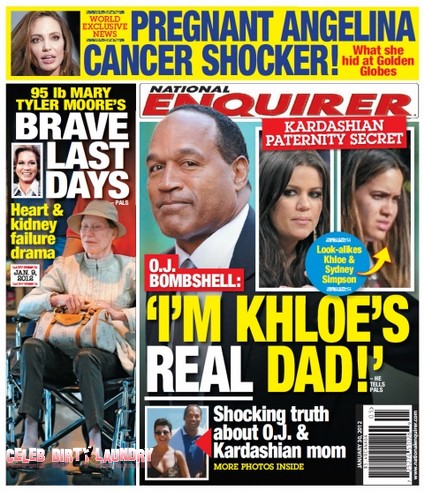 This week’s National Enquirer cover explains why Khloe Kardashian bears no resemblance to her sisters Kim and Kourtney – and the reason is simple… O.J. Simpson is her dad! It seems that O.J. has plenty of time to talk while he sits in jail for up to 33 years and the former NFL star has let it slip that he had an affair with Kris Jenner. Even worse, Sydney Simpson, O.J.’s daughter, looks like a clone of Khloe.

Kris has admitted sleeping around on her husband at the time, lawyer Robert Kardashian, and he and O.J. were close buddies. In fact Kardashian represented O.J. at his murder trial and was largely responsible for his acquittal. O.J. was known as an insane womanizer and Kris as a total slut – the logical conclusion is simple. If Robert had known that O.J. had fathered Khloe would he have been so helpful?

Rumors were circulating last week as genes don’t lie and Khloe has none of the dark Armenian looks of her three siblings – she is also built on an entirely different frame. With momanager Kris Jenner being a self-proclaimed tramp it is not a stretch that Khloe had a different father. Both Jan Ashley, 63, the woman who married Lawyer Robert after he divorced Kris Jenner and Ellen Kardashian, 63, who dated Robert for 6 years before marrying him two months before he passed away in 2003 came out last week and said clearly that Khloe is not Robert’s daughter – she is NOT a Kardashian.

Also featured in this week’s magazine they claim they have world exclusive news that Angelina Jolie is pregnant and she hid it at the Golden Globes.  The pregnancy rumors all stem from the fact Angelina said recently, “I could end up pregnant” when asked whether she and Brad would add to their brood.  The also go on to claim that she has recently had a cancer scare.

To find out all the shocking details of Khloe’s paternity and see photos of OJ with Kris Jenner, pick up the current issue of National Enquirer.