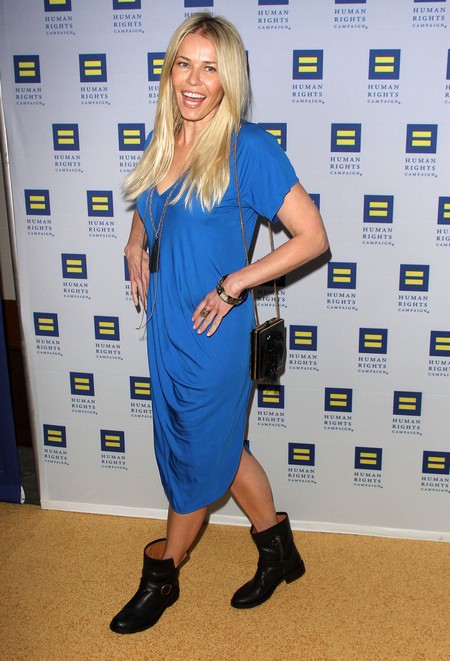 Chelsea Handler’s favorite sport is Angelina Jolie bashing and we think Jennifer Aniston has a major hand in it all.  Chelsea loves to put down Angelina and call her the worst sort of names – she even makes racist remarks about her ethnically diverse adopted children.  If Angelina was not the biggest star in Hollywood then we might even say that nasty old Chelsea was bullying her.   But there is a subtext here… and that is Jennifer’s close friendship with Chelsea.

SEE: Jennifer Aniston Is NOT Happy With The Engagement Of Angelina Jolie And Brad Pitt

Jennifer and Chelsea are bosom buddies – vacationing together and with Chelsea attending and speaking at Jen’s major public events – but that must mean that the good pals probably share their sentiments towards Angelina.  After all, if Jen disapproved of what Chelsea was saying about Angelina then we doubt that Chelsea would persist in her slander.

But all we have been hearing lately is how ‘happy’ Jen is for Angelina and Brad Pitt’s engagement.  Right – that is total bullshit – if Jen were happy for Brangelina then Chelsea would shut up at last instead of acting like Jen’s Angelina Assassin.

In Chelsea’s post-Brangelina engagement interview she slaps Angelina yet again, saying that she is an untrustworthy person with whom she would never be friends… of course she is friends with Jen!

New York Post Page Six reports:   Jennifer Aniston’s loyal close pal Chelsea Handler has blasted Angelina Jolie as “the opposite of a girl’s girl,” saying: “You just know as a woman, when you see another woman, if that’s a woman you can trust.”

Handler, when asked to describe the opposite of a girl’s girl, says in a story in More’s May issue: “Probably Angelina Jolie . . . She [Jolie] doesn’t strike me as someone I would have a close friendship with.”

The “Chelsea Lately” host counts Aniston as one of her closest friends. But while sources say Aniston is happy for her newly engaged ex, Brad Pitt, and Jolie, Handler has refused to apologize for calling Jolie a “home wrecker.”

What you think of Angelina has nothing to do with our point here – which is that Jennifer is again shown to be a big liar and total hypocrite, courtesy of the bad-mouthing done by Chelsea.  Come on Jennifer – stick to the truth – say you hate Angelina… we know you do.  Let us know if you agree or not.  Sound off in the comments below.