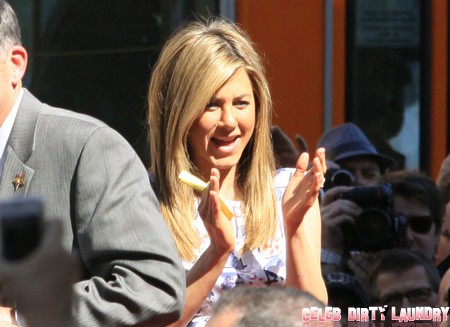 My mother used to tell me if you can’t make fun of yourself, you may be missing the colossal joke of the century. So as it appears, Jennifer Aniston is also in on the joke too. Aniston has been part of the Smartwater brand for a few years now making ads and doing print work for them. But this time was a little different, as it seems Aniston may be playing along.

Back in June reports emerged that Jennifer Aniston and Justin Theroux were working on a short film spoofing the gossip coverage of their lives, saying “It is a parody of the paparazzi and tabloid interest in Jennifer’s life. The movie will poke fun at nonstop speculation that Aniston could marry or get pregnant. The film, produced for Smartwater, is planned to be a new viral ad for the water brand she promotes.” So, can this in turn be the so called video that JustJen did together? If so, I would go back to not working again, it seems they can’t get it right.

The new commercial features the likes of Jimmy Kimmel, Ryan Seacrest, and even parodies the long winding rumors of Aniston as always being pregnant, her hair isn’t real, or that she has trainers “work out” for her. While I can understand why Smartwater thought this was a good idea in theory, it doesn’t seem like it’s translating well for a commercial.

Maybe they listened to JustJen for the whole idea, when in turn they should have come up with their own idea from the marketing department. But hey, what do I know? They are trying to sell water, and maybe by doing so they also sell a satire of Jennifer Aniston. The only thing that we know for sure is that they paid Aniston well enough to make fun of herself.