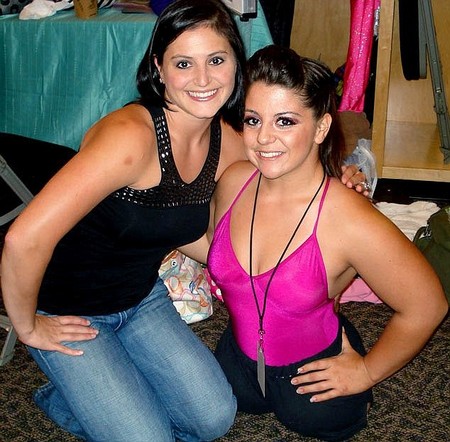 She was raised in Illinois and competed for state titles and in the Junior Olympics until finally at age 16 her parents, Sharon and Gerald Bricker, told her about her true Romanian-American roots.  Jen then waited for four more years before reaching out to her big sister.

It was the biggest bombshell of my life,” Moceanu, 30, told ABC’s 20/20. “I had this sister that was born who was given up for adoption, and I never knew it.”

When Moceanu asked why her sister had been given up for adoption she was told that her parents had coldly decided that Jen, who was born without legs, would have medical expenses that were beyond what they could pay.  Moceanu’s gymnastics’ training under Bela Karolyi was never cheap and obviously took precedence.

Jen has beaten the odds and built a name for herself with a career as an aerial gymnast in Studio City, California.  Obviously that Moceanu gumption and fight runs as much through her veins as it does her famous sisters!

Both sisters have recently posed for pictures and it looks like Jen will be hitting the talk show circuit to tell her story.

What do you think of the Moceanu’s choosing their star athlete’s career over their other child’s health issues?  Pretty disgusting if you ask me. Tell us in the comments below!