BY Scuttlebooty on May 2, 2012 | Comments: 2 comments
Related : Jennifer Lawrence, The Hunger Games 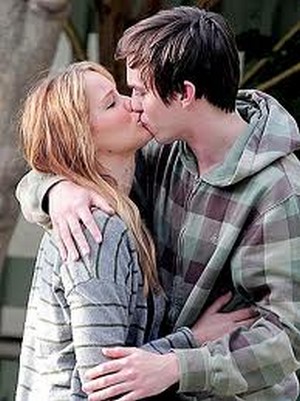 Jennifer Lawrence is hungering to get closer to her boyfriend, Nicholas Hoult, but her mother, Karen Lawrence is not having it. Lawrence and her X-Men co-star were making plans to take their relationship to the next level and move in together but Mama Karen thinks the young Hollywood power couple should slow down.

“They’re antsy to move into her Los Angeles home together, but her mother Karen is very much against it. She thinks they’re both too young and need to focus on their careers instead of complicating their lives with domestic matters,” a source tells the National Enquirer.

Both their careers are red hot. Jennifer shot to fame with her Oscar nod in last year’s Winter’s Bone and has followed up brilliantly with this year’s blockbuster The Hunger Games. But Hoult’s no slouch. He captured hearts as a nerdy youngster in 2002’s About a Boy and has since caught critical acclaim for his roles in the UK’s Skins and alongside Colin Firth in A Single Man.

Jennifer met Hoult during filming of the latest X-Men movie and they’ve been dating ever since. The couple has been papped doing ordinary thing around Hollywood like smooching in public and even shooting hoops at the park.

They’re young and in demand BUT they’re in LOVE… so there’s no reasoning with them. Jennifer’s afraid she’ll lose Hoult if she listens to her Midwestern, sense-talking mother.

The source says Hoult is demanding his girlfriend ignore Karen’s disapproval and continue their plans for cohabitation but now Jennifer is feeling the pressure and having second thoughts.

“Jennifer has a lot of respect for her mother, so she’s really torn about living with Nicholas. The bottom line is she’s extremely confused and trying to find a compromise to please both her mother and her boyfriend.”

Poor Jennifer. That’s not an easy situation to be in. She’s got tons of money and freedom and probably feels like a grown up. But she’s only 21. And Nicholas is only 22. That’s young to move in with someone. I have to side with Mama Karen on this one. There’s no reason they can’t keep separate houses but always be together at one or the other. Sure, it’s a waste of money but it’s not like they don’t have it and it’s a nice fall back to have if the relationship goes south. I love this couple but, because of their ages, I’m guessing it won’t go the distance. But I could be wrong! Tell me you think I’m wrong!