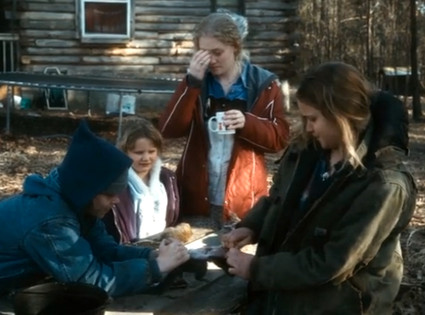 Jennifer Lawrence thinks that PETA is a royal pain in the arse and has made her sentiment very public.  Jennifer told Rolling Stone the she actually did skin a squirrel in her 2010 film Winter’s Bone.  The celeb made it clear that she didn’t intend to have her behavior controlled by PETA and their propaganda.

Jennifer who plays the lead character in The Hunger Games, Katniss Everdeen, said:  “I should say it wasn’t real, for PETA – But screw PETA.”

PETA hit back at Jennifer calling her immature and insensitive.  Talk about a tempest in a teapot…

OK! Mag reports: Sounds like Khloe Kardashian isn’t the only one turning her back on PETA. The Hunger Games star Jennifer Lawrence is receiving some harsh backlash from the organization after she openly discussed her experience skinning a squirrel for the 2010 hit film, Winter’s Bone, which garnered her an Oscar nomination.

Jennifer recently told Rolling Stone that the scene wasn’t fake and that she actually did skin a squirrel. “I should say it wasn’t real, for PETA,” she confessed to the magazine. “But screw PETA.”

Obviously, Jennifer wasn’t trying to be disrespectful, but it may have come off that way, which explains why PETA is fighting back.

“She’s young, and the plight of animals somehow hasn’t yet touched her heart. As Henry David Thoreau said, ‘The squirrel you kill in jest, dies in earnest,'” the organization’s president, Ingrid Newkirk told The Gothamist this morning. “When people kill animals, it is the animals who are ‘screwed,’ not PETA, and one day I hope she will try to make up for any pain she might cause any animal who did nothing but try to eke out a humble existence in nature.”

Jennifer has yet to comment on PETA’s response to her confession of harming an animal, but we’ll make sure to keep you updated.

Many celebs fear PETA and so pretend to go along with them.  Other celebs actually take PETA’s agenda to heart.  Then there are those brave iconoclasts such as Jennifer who just tell the screw off!

What do you think?  Should Jennifer pretend that she cares about squirrels or do you appreciate her candor and guts?  Let us know in the comments below.