BY Jeanne Adams on May 23, 2012 | Comments: one comment
Related : Casper Smart, Jennifer Lopez 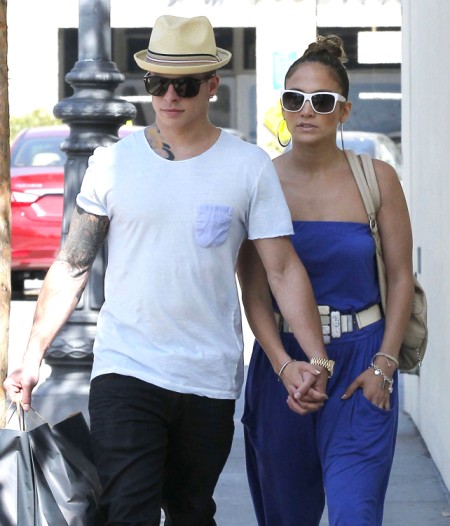 In yet another classic example of a decision Jennifer Lopez will regret in a few years, she has pitched a reality show to the Oxygen network featuring her boyfriend, Casper Smart, whipping her dancers up to snuff for her new summer tour. And, naturally, Oxygen picked it up for a series.

Page 6 reports the show will focus on Jennifer and Casper’s professional relationship. That interests me because I don’t think Jennifer knows how to keep her business and private life separate which is why she falls in love with men she works with (Ben Affleck, P. Diddy) and men who work for her (Casper Smart, Chris Judd).

If the relationship happens to tank then the series will be yet another show Jennifer stars in with an ex. Jennifer was just seen in “Q’Viva! The Chosen” with ex-husband, Marc Anthony, where the two traveled throughout Latin American seeking talent.

You’ve got to hand it to Casper Smart though. He just keeps chugging along with no embarrassment or shame in everything Jennifer is handing to him. Just a few months ago he was just a backup dancer. Now, he’s the choreographer of a huge summer tour and soon to be reality star.

Jennifer might be stupid when she’s in love but I find it hard to believe she’s stupid in business. You don’t get to where she is with marginal talent AND no brains. So I don’t understand this move. Is she aware of the Casper Smart backlash out there? Is she trying to improve her cradle-robbing image by letting viewers in on their relationship? I know a lot of you out there are all, “Let the woman have fun, she’s not harming anybody!” And I would totally agree with you if she was just screwing him on the side. But she’s not. She keeps inching him into the business – her business – and that’s troubling. Why can’t she just have her trysts and toss them aside like Madonna? Madonna would NEVER allow a lover to share the spotlight and that makes her a star. This lacks confidence to me. Jennifer looks like a nervous teenager who’s trying to clean up her skuzzy boyfriend with some new clothes and a job before bringing him home to meet her parents. Which leads me to believe Casper isn’t going anywhere any time soon. That might be good for gossip, I guess, but also might be bad for her image and her checkbook in the end.