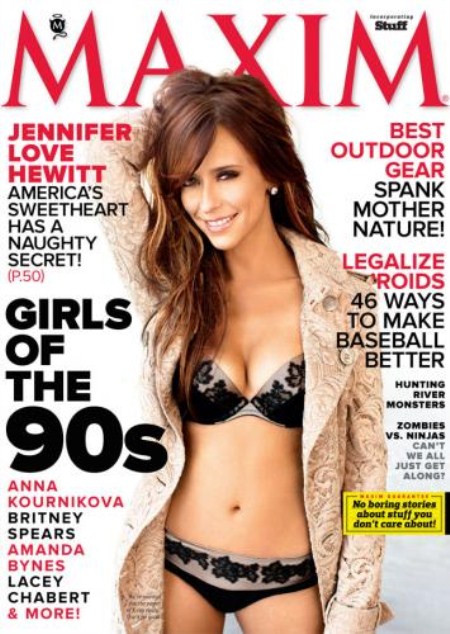 It’s like the 90’s all over again! Jennifer Love Hewitt marks her 4th appearance on Maxim magazine’s cover this April, and it’s no surprise that the 33-year-old actress isn’t wearing much! In the preview for the April issue of the popular men’s magazine, Hewitt says all the right things as she discusses her favorite body part, vagazzling, and her new Lifetime series “The Client List.”

Hewitt’s latest effort, “The Client List,” is a scandalous show about a Texan wife and mother named Riley Parks who finds herself working as a massage therapist with benefits—and we’re not talking health insurance people. In Maxim, Hewitt calls the “lingerie heavy” show a change from her usual roles. “I’ve never played a character who is this overtly sexual,” she says. “It’s definitely going to be a departure from the normal stuff I do. Plus, we have a lot of really fun things in the series eye-candy-wise for our audience.”

It sure sounds like the woman-centered network is really trying to pump up their male demographic. “It’s not going to be your mother’s Lifetime,” says Hewitt.

During her interview, Hewitt opened up about her body, admitting that her favorite feature isn’t her hair or eyes, “It’s horrible to say, but I like my boobs. They’ve always served me well. They’re good.” Hey, at least she’s honest!

The actress, who caught some harsh media scrutiny in 2007 regarding the rest of her body, told the magazine how she stays in shape now while balancing her other interests: “Pole dancing. It’s a great way to stay in touch with your sexuality. I also love to cook, so I can have a cake in the oven while I do a pole dance.”

Hewitt, who popularized the word “vagazzle” after admitting on George Lopez’s talk show that she puts crystals on her nether regions, also told the magazine that she vagazzled for the shoot. “The fun part of being a girl is that there are little beauty things you can do to make yourself feel special,” she said. “I can walk around all day and think, nobody has any idea that I have a sparkly secret in my pants right now.”

“The Client List” Premieres on Lifetime on April 8th at 10/9 C. If you want to read more of Hewitt telling Maxim everything they want to hear, check out the April cover on Newsstands March 16th.