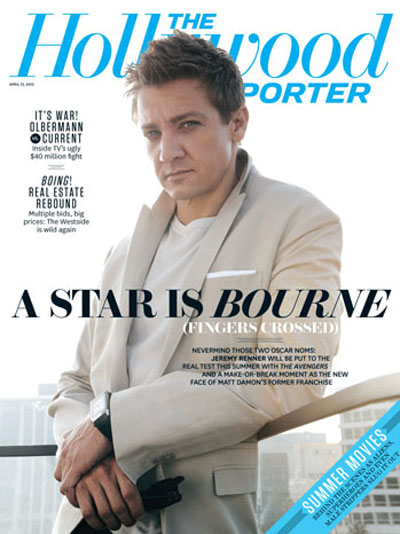 Jeremy Renner is a punch-throwing, knife-fighting man’s man (or at least, he plays one in the movies) and he wants everyone to know that he’s not gay, despite the constant tabloid rumors.

The 41-year-old actor, who has been officially linked to celebs like Scarlett Johansson and Jessica Simpson and unofficially rumored to be hooking up with men, was recently interviewed by the Hollywood Reporter and decided to set the record straight about his sexual orientation:

“I want my personal life to be personal, and it’s not f—ing true…And I don’t care if you’re talking about things that are true, you’re still talking about my personal life. How about I go peek in your window, take what underwear you wore last night, whose husband you were f—ing, and shove that in the megaphone throughout your neighborhood? How does that feel?“

Jeremy does admit that he did have one fella he was sweet on, his 8-month-old French bulldog named Franklin, who sadly passed away last month.

“He was my solution for being so lonely,” he said of the pup.

Gay or straight, it sounds like that the Bourne Legacy actor just needs someone (or something) to love! Related: First Look At Jeremy Renner In The Bourne Legacy