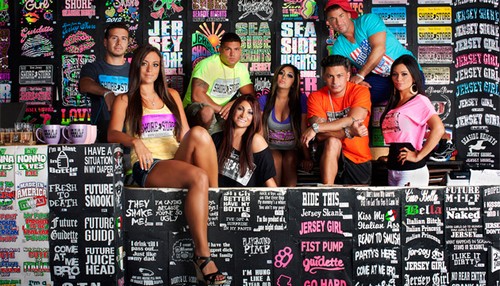 Tonight on MTV a new episode of JERSEY SHORE airs called “The Icing on the Cake.”  On tonight’s show the roommates prepare to say goodbye as the final summer in Seaside Heights comes to a close in the season final.  After six season Jersey Shore is coming to an end.  The final show was shot way before Sandy devastated the beach in New Jersey and shattering the Boardwalk.

The show has mostly been about drunken parties and antics.   Summer after summer, we’ve watched them party, tan, and throw-down on the Jersey Shore. And now, America’s favorite roommates head to the shore one last time and what better to end the series with than a party.  On tonight’s show Snooki, Mike, Pauly D, Sammi, Ronnie, Deena, Vinny and JWoww take over the beach by their Jersey Shore house to celebrate the end of  Jersey Shore. Vinny’s mom stops by bringing hoards of food and Uncle Nino stops by as well being his usual self.

Snooki had this to say about tonight’s finale, “Even when we filmed the last day in Seaside, me and Jenni were bawling our eyes out, just because, like, we were looking at the house and everything that’s happened, you know, what the show gave us, and we’re saying goodbye to it.  So it’s definitely bittersweet and very sad.”

Tonight’s episode is going to be filled with the usual Jersey Shore antics and you won’t want to miss it, so be sure to tune in for our live coverage of the show tonight at 10 PM EST! While you wait for our recap hit the comments and let us know how you feel about the end of Jersey Shore.  Will you be shedding a tear or two?

Wow – the final episode of the Shore… Where will we go for wisdom and guidance and living happy, well adjusted lives without Snooki and crew there to guide us?

The beach bonfire goes on. Sammi talks to her parents about ending the drama in her life. She says her journey with Ronnie has covered every extreme. She says they have an amazing connection that no one understands. She says she and Ronnie are going to move in together – her dad doesn’t look too happy about it. Ronnie’s dad is less than thrilled as well.

Sammi’s dad reminds her how much they used to fight and she says he’s just skeptical. Sammi hugs her folks goodbye.

The gang kicks sand on the fire and says it’s a “symbolization” of the end of their life at the shore.

Pauly says it’s their last day working at the Shore Store. He says he’s going to miss seeing Danny every day. Vinny asks Danny how they put up with him and he admits that Mike drives him nuts. Sitch says he will not miss Danny riding him.

Sitch says no one works their last day of work or school. Snooki agrees it’s sad to say goodbye to Danny.

Sammi and J Woww had out to tan. Paula left a cake and card for Mike and the girls think she needs to slow her roll.

Sitch and the guys are talking. They all say it’s t-shirt time and promo the reunion special…

The girls hand Mike the cake from Paula. Pauly tries to steal the cake. Sitch says he can do anything to her. Pauly says she probably poisoned it. Ronnie says it’s not a good idea to eat cake from an ex. Sitch and Pauly dig in – he says she won’t poison him since she wants to still get with him.

Pauly and Vinny decide to take Sammi’s bed up to the roof, but they pop her air mattress. They fall apart into complete hysterics and label it a prank gone bed. They say it’s a fail. They put it back in her room and try to cover it up.

Sammi and Ronnie come home and see the flattened bed. They want to know who did it. She thinks it’s funny, but Ronnie is not amused. He tries to refill it with an air pump but it won’t inflate. Vinny laughs because they’re at it for an hour. Vinny thinks he may be off the hook because Ronnie’s more mad at Sammi than them. Sammi and Ronnie erupt into a f-u fest over the deflated bed.

It’s prank time at the shore house and the guys totally wreck Ron’s bed. He’s left fuming while trying to re-inflate his air mattress. Of course it’s not going so well and I have to wonder what wall Ron will punch or what he’s going to throw. Actually, he seems to have a bigger ax to grind. Sammi is playing the part of Betty Crocker while Ron fumes at her.

Sitch is celebrating his birthday and it’s the first time he has celebrated while clean and sober. He’s pretty proud of himself, as he should be.

Ron’s dirty looks have turned into an all out war between Sam and him. The gang says that they haven’t fought in a long time so clearly they’re making up for some lost time here. Ron wants an apology to Sam for messing up his bed. She tells him that she’s sorry the guys messed up his bed, tells him goodnight and leaves.

Paula had dropped off a cake at the house for Sitch and when the housemates go to the tanning salon they see a photo of a guy with his balls smack in the middle of the cake. They’re all grossed out as they figure out who actually ate the cake. Sitch goes to call her and she answers but does the old “I can’t hear you. Hello. Hello.” thing.

The gang sits around for the last few minutes reminiscing about their time in Jersey. Snooki believes that she has grown up since arriving in Jersey. She went from hard partying 21-year old to mama-to-be homebody. Jenni met Roger, the man of her dreams.  The guys all think that the bond they share is a permanent one. Nothing will split them up.  Vinny says he is walking away with friends for life.

The cast has their very last family breakfast together and then packs up their rooms. It’s pretty clear that this crew really does love each other in the most dysfunctional of ways. They’re all crying as they go their separate ways.  What are we gonna do with out our weekly Jerzday fix?