Jessica Sanchez VOTED out! Judges Save Her! (Video) 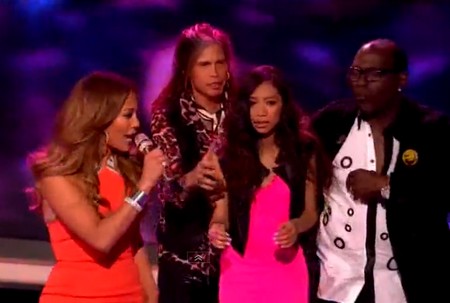 We knew tonight that America was going to send one of the Idol Jessica Sanchez favorites to the chopping block, did you see the show? If not, you can read the full recap HERE.

In a “shock and awe” moment, the three contestants who did very well last night; Elise Testone, Joshua Ledet and Jessica Sanchez were in the bottom three tonight and after the nationwide vote, Jessica Sanchez was up for elimination.

Jessica began singing her final song in hopes of convincing the judges to save her, but it didn’t last long. Jennifer Lopez, Randy Jackson and Steven Tyler all rushed to the stage to tell Jessica that they would be using their “one and only” save tonight. Jennifer shouts, “You’re not going home! This is ridiculous! We’re using the save!” Randy then says, “This girl is one of the best singers in America — are you kidding me?! Everyone, please vote for the best!”

When 16-year-old Jessica Sanchez said she has sang her whole life, she meant it. By age 11, the singer had already appeared on America’s Got Talent and now she has been saved on American Idol Season 11.