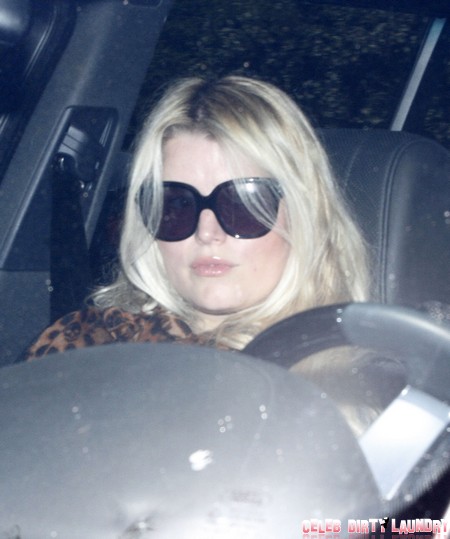 Jessica Simpson put on 70 pounds during her pregnancy with daughter Maxwell Drew and the 32-year-old Fashion Star is still carrying most of it.  Despite a reported regimen of intense exercising and strict dieting the former 130 pound beauty can’t get under 180 pounds – she weighs 182 right now according to an insider.  None of this would matter, except to Jessica’s heavyweight ego, if she was not under contract with Weight Watchers to lose 30 pounds by September 1.  Jessica peaked at a reported 200 pounds before given birth on May 1, 2012.  That means the frustrated dieter has not even lost 20 pounds in her 4 months of struggle.  Oh well, too bad, so sad.   Looks like the execs at Weight Watchers might want to do some renegotiating on Jessica’s bloated $4 million contract.

Jessica faces further embarrassment as she is slated to appear as Katie Couric’s first guest on her eponymous ABC show, Katie .  Everyone will be tuning in this coming Monday, September 10, to see what Jessica has managed to accomplish on her dieting odyssey.  We broke the story right here at Celeb Dirty Laundry that Jessica’s Life& Style photos implying great weight loss and a return to her prior sexy physique were FAKE.  Jessica and her people are desperate to make everyone think she has slimmed down but the reality is simply that she can hardly lose weight.

Is it possible that Jessica is will resort to extreme measures like athletes sometimes do in order to qualify for weight classes in competition?  These techniques include taking diuretics and amphetamine-based diet pills, human growth hormone injections (a real Hollywood favorite), certain anabolic steroids, and even going on non-oral/intravenous nutrition.  Bodybuilders, weightlifters and competitors in martial arts like wrestling, boxing, and MMA have been known to use the above techniques, sometimes with success, sometimes with disastrous consequences.

Star Magazine Print Edition, September 17 reports:  According to an insider, the Fashion Star mentor hit a plateau and has been ‘lingering at 182 lbs. since July,’ despite working out and eating healthy. Now that her Katie interview is looming, Jessica has become totally obsessed with trimming down, ‘exercising six hours a day and watching every calorie she puts in her mouth,’ reports the source.

The insider reveals that for her appearance on Katie Jessica will do anything he can to appear slimmer than she actually is. ‘She’ll wear multiple pairs of Spanx to make herself appear thinner and is even prepared to completely tape the fatty areas of her body if need be.’  The source adds, ‘she’s embarrassed and desperate.’

WTF! Jessica is embarrassed?  This is the same person who screamed details about her gigantic orgasms and amazingly wild sex life with hapless Eric Johnson right after giving birth.  Now she’s embarrassed because she is a bit fat?  If this doesn’t tell you what is wrong with Hollywood than nothing will.  I refuse to explain further.