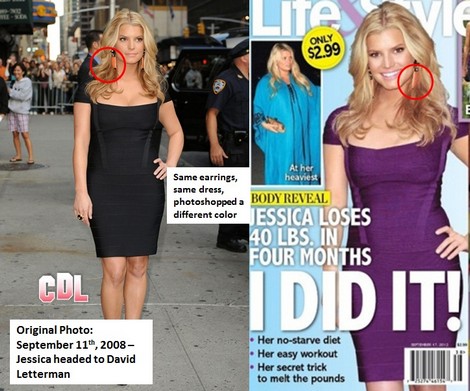 Jessica Simpson should rather stick to eating Chicken of the Sea, because it seems that the blonde haired boob has been lying about losing weight. The latest issue of Life & Style shows Jessica Simpson parading like a drooling lunatic while being all Version 2.5. The image used in Life & Style is an image of her years prior to her pregnancy that has been doctored and Photoshopped.

What does this mean to the perfectly stable image of Jessica Simpson? Firstly, Jessica is quite simply lying. We believe she has been stuffing her face with crab sticks and cat souls and has not lost the weight she claims to have lost. Secondly, this clearly proves that Jessica is a fraud and should be lambasted by all. Lastly, Jessica has become a mythical figure, with more lies in her belt than the entire Casey Anthony trial put together. We’re harsh on her, yes, but the world needs to know about her weight loss lies.

If only Jessica were intelligent enough to know that entertainment sites, such as our very own Celeb Dirty Laundry, never leave a gossip stone unturned and whether the story is a complete lie, a piece of the truth or nothing but the truth, a gorged moose needs to be brought to justice in the moose court. We’re bringing down the gavel and sentencing this lying famewhore to life, without the possibility of food.

TMZ also reported today that Jessica Simpson has indeed been lying, with images clearly showing the abhorrent fabrication of her recent revelations. These quite clearly prove that this lying lunatic hasn’t lost all of that weight and still waddles around like a Biggest Loser contestant. Is it possible that one single woman could be such a fraud? What else does she lie about in life? Perhaps she doesn’t even sing, like her lip syncing sister Ashlee Simpson? Perhaps, Jessica Simpson isn’t really alive? (Gasp!) How did this cray-cray freak manage to survive for so many years?  We’re surprised she hasn’t been found eating a tin can and dying from perfume inhalation.

In another life, Jessica Simpson might have fooled us, but in this one, we can all clearly see that this big breasted faux singer has not been able to shed off the pounds and revive her career as the spokeswoman for a smattering of overweight people. She should stick to eating – obviously she does that the best.

Let us know in the comments below if you think Jessica is the Biggest Loser Liar.