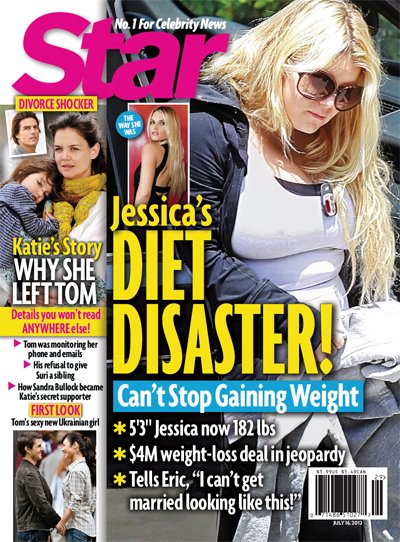 Jessica Simpson’s gaining weight faster than she can lose it and her diet is a disaster. This is bad news for Jessica since she chubbed out to the max during her pregnancy with Maxwell Drew and is on contract with Weight Watcher’s to shed those many excess pounds.  The going is tough for Jessica despite her rigorous exercise schedule and strict dietary regimen.

It seems that cheating on her diet might be the problem for Jess.  During her pregnancy, which seemed to last forever, she got used to eating anything and everything she desired.  Jessica was completely self-indulgent food-wise and ballooned to truly massive dimensions – eventually looking like an excellent candidate for ‘The Biggest Loser.‘  You know, a girl with a pretty face but just way too much body.

Now the food party is over, the baby is born, and the excuses are gone. Jessica wants to be big star again – she has ‘Fashion Star‘ and her $4 million contract with Weight Watchers plus tons of other celeb activities.  Problem is she has no interest in being seen in her current state of morbid obesity – which is at least 40-50 pounds overweight. At 5’3″ Jessica thinks she looks fat now and she has a long long way to go to get back into her former shape.

All this would be okay if Jess were losing weight – but according to the current issue of Star Magazine’s cover, Jessica is having a Diet Disaster and Can’t Stop Gaining Weight!  Star reports that Jessica has told fiance Eric Johnson that there is no way she can get married looking like she does.  Also, Star reports that her current deal with Weight Watchers is in jeopardy.  Just a few weeks ago Jessica was bragging about her amazing sex life – now she is mired in dieter’s purgatory – not only unable to lose weight but actually gaining!

Do you think Jessica’s weight loss plans were too ambitious?  Should she just be content to be chubby and happy?  Does every female celeb think that they need to look like Angelina Jolie? Let us know what you think in the comments below.