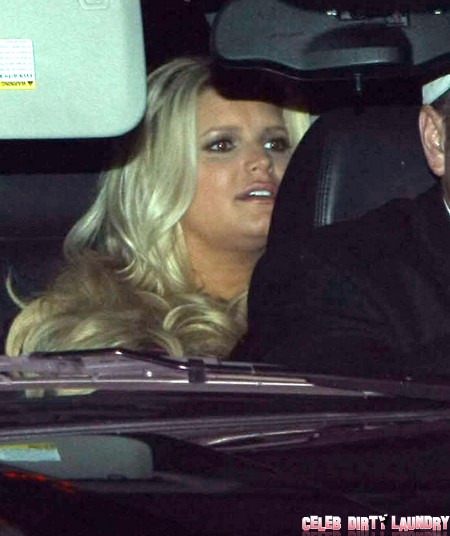 Jessica Simpson spent her entire pregnancy indulging in whatever she wanted, whenever she wanted it, and now the regret is setting in. Her weight reportedly rocketed to 210 pounds before FINALLY delivering daughter Maxwell Drew, back in May.  If she thought the press was mean before she must want to slit a wrist now.

Weight Watchers’ reportedly wants her to drop 50 pounds in just a few months and adding to that pressure are the very unflattering post-baby shots popping up daily.  In Touch Weekly slams Simpson in the latest issue and the Daily Mail has picked out some of the lower points.  And what about her baby daddy Eric Johnson who has has some pretty nasty things to say?

“So far this month she has been spotted several times heading to the gym in a desperate bid to lose her baby weight. Since giving birth to her daughter Maxwell Drew on May 1, Jessica Simpson is said to be determined to slim down.  It has now been revealed that the 31-year-old is on a strict timeline to lose the pounds for her upcoming Weight Watchers campaign – in which she is getting paid a reported $4 million to reach her 130 pound goal weight. The singer and actress has been given the task of losing 50lbs in just five months, according to In Touch magazine. But according to the publication, friends say that the star, who is also trying to care for her newborn little girl, is feeling ‘stressed and overwhelmed’.

Sources tell the publication that the singer, who weight a reported 210 pounds at the height of her pregnancy, is also physically exhausted. ‘She’s consumed with the new baby,’ another source told the magazine. ‘She and Eric are often up with Maxi (Maxwell) all night.’

Jessica, who is said to have enjoyed a diet including Mac and cheese, Pop-Tarts, peanut butter and jelly sandwiches, Cap’n Crunch and fried chicken while she was pregnant, is said to be desperate to get her body back.  ‘She gets so upset,’ her friend said. ‘She wants her body back so badly, but it’s beyond hard.’  Instead of the junk, In Touch reports that Jessica is now feasting on a healthy diet consisting of oatmeal with berries for breakfast, grilled chicken on salad for lunch, hummus, carrots and fresh fruit for snacks and salmon, broccoli and brown rice for dinner. However she reportedly throws in the odd treat in between for the sake of not caving altogether.  ‘She’ll have the occasional slice of pizza. If she feels deprived, it won’t last,’ the source added.

Jessica has also enlisted trainer Harley Pasternak to whip her into shape. And another motivation to drop the weight and get into shape, friends say, is her new daughter.

‘Jessica wants to set a good example for Maxi,’ an insider told In Touch. ‘She wants to teach her daughter to have a healthy lifestyle.’

Should Jessica have such a lofty goal set for herself?  Wouldn’t it be wiser for her to set a goal of being healthy and in shape for herself and her daughter?  I can say with certainty that a new mom can certainly lose 50 pounds in 5 months, if her body cooperates and if the majority of what she gained was necessary to carry the baby. But I question whether or not she is going to go about losing it the right way and in the past, Jessica has proven to be an emotional eater.  What if the stress of losing actually backfires and nothing comes off?

Should the press back off and stop heckling the new mom?  Do you think Jessica is already struggling to get her appetite under control?  Tell us what you think in the comments below!