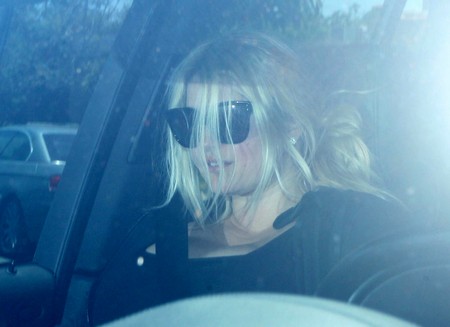 Eric Johnson finds Jessica Simpson’s body is now a turn off and he is disgusted with her attitude.  Jessica keeps pigging out and is consequently unable to lose any of the 60 plus pounds she packed on while pregnant with Maxwell Drew. Experts insist that recent photos showing a decent looking Jessica have been extensively retouched.  Sources claim that the truth is that Jess now has saggy breasts, a bloated belly, ugly stretch marks and sloppy double chin.

A source told the Enquirer the reality about Jessica’s current state:  “Her stomach is bloated and laced with stretch marks, and flaps of skin hanging over jeans in a post-pregnancy muffin top. It’s got Jessica down in the dumps and worried that Eric is still turned off by her body.”  Quite a different tale than the one Jessica spun last week when she bragged about all the amazing sex she and Eric are already enjoying.

The 31-year-old singer turned-fashion maven is still eating for two and struggling to lose her baby weight a month after giving birth to daughter Maxwell Drew insiders say.

Fiancé Eric Johnson is said to be less than thrilled by Jessica’s constant complaining about her post-pregnancy body, and experts believe recent photos have been extensively retouched to lop off Jess’ fat.

“Jessica was once famous for having a body to die for, but now she’s a mess. Her body has gone to hell,” a source told the Enquirer.

They’re both thrilled with baby Maxwell, who weighed 9 pounds, 13 ounces at birth on May 1. But the “fashion star” mentor can’t stop eating, said the source.

And even though she signed a deal with Weight Watchers, reportedly for 4 million, Eric remained skeptical that Jessica-who gained an estimated 60 pounds during her pregnancy-can slim down, added the source.

“When she got pregnant, Jessica went on a nine month food bender,” revealed the source.

“She was packing way up to 3000 calories a day and she still eating like a horse because she’s breast-feeding.”

“Eric loves Jessica no matter what, and he sick and tired of hearing her whine about her new body. But is turned off by her lack of self-confidence.”

The photos that we see released of celebs often make me laugh.  Magazines and advertisement producers think nothing of shaving off tons of fat and plenty of years to help perpetrate their deceptive practices.  One example that comes to mind is Khloe Kardashian and her photo for the British Quick Trim promotional campaign – you should check out the photo here – you won’t believe these people’s gall.  Anyway – it looks like Jessica will have her work cut out for her if she intends to remain a spokesperson for Weight Watchers.  And if Jessica wants to stay on Fashion Star then she is going have to slim down.