Khloe Kardashian Struggles In Vain To Lose Weight – She Is Huge! (Photo) 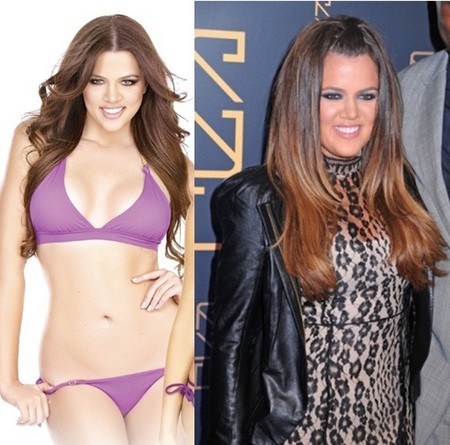 Khloe Kardashian is a big woman with a big weight problem and she is struggling in vain to lose some of that excess weight. Why doesn’t she just use some Quick Trim? As we have reported here at CDL Khloe has said that being the fattest and largest Kardashian has been a life long struggle so why not just lose that weight with her own product?

Like all of the Kardashian/Jenner family Khloe makes a great living off of making her life into a public spectacle – and so it is no surprise that she has been tweeting about diet and exercise lately.  After all, who better to learn how to lose weight from than someone so obviously incapable of dieting or exercising effectively herself?  What is hilarious is to see the photo of Khloe created for her British Quick Trim launch beside one that is not photo-shopped to the extreme.

Khloe is being sued for promoting Quick Trim in the USA but this hasn’t stopped her from grabbing more money from the gullible in Great Britain.  Like hey guys, if Quick Trim is so darn effective then why is Khloe so darn overweight?

Khloe married a giant basketball player – Lamar Odom – in order to appear smaller and thinner than she actually is.  Problem is that Khloe occasionally appears in public without Lamar.

Entertainmentwise reports: The Keeping Up With The Kardashians star has been tweeting about avoiding junk food especially when her brother Rob is eating doughnuts around her.

“Rob is torturing me! I’m eating carrots and he’s eating a doughnut. Saying to myself “Don’t do it!” LOL,” she wrote yesterday, while adding a picture of her sticks of carrots next to a half-eaten Krispy Kreme.

Many of her 7 million followers were quick to offer their support, with the 27-year-old replying to one: “Yes I can!!! (Nutty Professor voice) “@cissy79: @KhloeKardashiandon’t do it u r stronger than the donuts!(sic)”

The reality star then revealed that she was cooking up a storm in the kitchen, but everything was going to be healthy as she’d managed to ‘resist the temptation’.

“I resisted the temptation of the doughnuts!!! Now I’m boiling some artichokes and baking some sweet potatoes and other goodies for Lam :)”

It’s not known how much that Khloe wants to lose, but she later tweeted a picture of her trainers along with her husband Lamar Odom’s with the caption: “Oh yeah!!! Oh yeah!!! We got our fitness onnnnn!!!”

Some of you might say I’m being mean for picking on Khloe and her weight problem.  Here is my defense:  if Khloe wouldn’t put herself out there as a PAID spokesperson for weight loss then I’d leave the topic alone.  But as long as she is going to try to con the public then I am going to try to point it out.  What do you think?