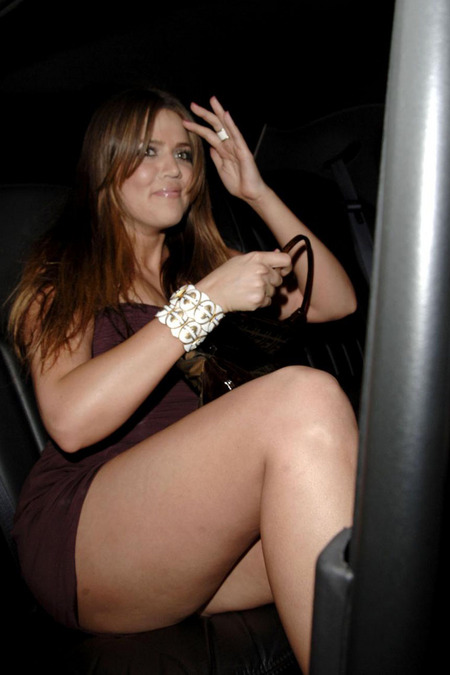 Khloe Kardashian says about her big sister Kim Kardashian and herself ‘we love our big butts’ but the wife of failed basketball player, Lamar Odom, admits that being fat has been a life long struggle.  Speaking to the British magazine More!, to charm the locals in preparation to move the Kardashian mess to London for the summer, Khloe said that she is ‘trying to tone up.’

‘I’m working out really hard right now,’ said Khloe who has called herself ‘fat’ when speaking to her sisters Kim and Kourtney on their reality TV show Keeping Up with the Kardashians.

Khloe whined: ‘I’m trying to tone up. My weight has been a life-long struggle and I have to work so hard to stay in shape. I think, when I got married, I got lazy. Lamar and I had a phase where all we would do is lie with each other and do nothing.’  And from what we here about Lamar cutting Khloe off from sex that sounds about right!

Khloe cleverly refuses to compare herself to her smaller sisters – and that makes sense since all indications are that she is in fact does not have the same father as Kim and Kourtney.  As Kris Jenner has basically admitted, Khloe’s real dad is Alex Rodan, her mom’s hairdresser for many years.

RELATED: Khloe Kardashian Gets A Radio Show And A New Father (Photo)

Khloe said: ‘There’s no point. I’m 5ft10ins, they’re 5ft and 5ft2 – it’s not a good comparison, we just have different bodies. But do they have body parts I wish I had? Yes! I wish I had Kim’s boobs. I do have issues with my tummy and my arms, but you can always tone them up.’

Khloe Kardashian is a big girl and that is a good thing since it shows that not everyone female who achieves success in Hollywood has to look like an anorexic.  Let us know what you think in the comments below.