Khloe Kardashian Gets A Radio Show And A New Father (Photo) 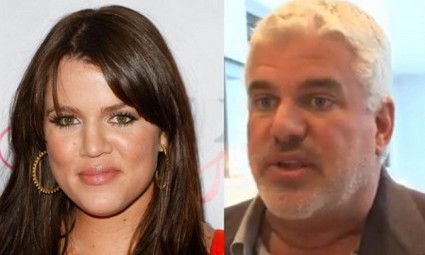 Khloe Kardashian has been the subject of vicious rumors claiming that she in not the biological daughter of the late lawyer Robert Kardashian. Her mom, the loose goose Kris Jenner admitted sleeping around during the period when Khloe was conceived. Kris sounded off on Jay Leno about being a slut and having other lovers while still married to Robert. So given that Khloe bears no resemblance to her sisters or father it is not surprising that idle chatter about who her real dad might be has been a frequent annoyance. Below you will see some photographic and circumstantial evidence that leaves little doubt that Khloe’s dad had been discovered and revealed!

Now the truth is known. Khloe’s father is Alex Roldan.  According to BlindGossip:  Kris intends to introduce Khloe’s real biological father as a plot point on a “very special episode” of one of the Kardashian shows. We’re going to spoil her surprise by introducing him here first. (FYI, Kris did tell Khloe who the man is already, so this is not coming a surprise for anyone in their family. Plus it’s all leaking out this week, despite Kris’ desire to keep it a secret until showtime to make the ratings as high as possible.)

No, it’s not Todd Waterman. And, no, it’s not OJ Simpson!  Meet Alex Roldan, Kris Jenner’s hairdresser. This may be Khloe Kardashian’s biological father. He worked on a music video that Kris Kardashian did for her 30th birthday called “I Love My Friends”. Alex is now a hairdresser in West Hollywood. While Robert Kardashian was only 5’7? tall, Alex is a much larger man, standing approximately six feet tall. BTW, Khloe’s middle name is Alexandra.

Wow – just wait until you look at all the pictures – you’ll be as convinced as I am. By the way, Alex has been Kris’ hairdresser for the past 30 years and Khloe is 27… . Oh well, O.J., better luck next time… guess you are NOT Khloe’s papa.

Oh yes, the rest of the story… Khloe is going to be the host of new programme ‘The Mix Up with Khloe Kardashian Odom’ which will be broadcast every day on Dallas station MIX 102.9, which is part of Clear Channel Media.

The show starts on January 30 and will be a “one-hour, commercial-free show where Khloe will take requests, chat with her celebrity friends, and more during the Mavericks’ season while she’s in Dallas with her husband Lamar Odom.”

MIX 102.9 programme director Jay Michaels described the 27-year-old brunette’s arrival as “a new era where our on-air talent is also an international star.”

Khloe – whose famous sisters are Kim and KourtneyKardashian – previously hosted a radio show on Miami’s Y100station called ‘Khloe After Dark’.

What do you think the audience will ask Khloe? I can think of so many things… .