Jessica Simpson Plastic Surgery Secret Revealed! Is That How She Really Lost The Weight? 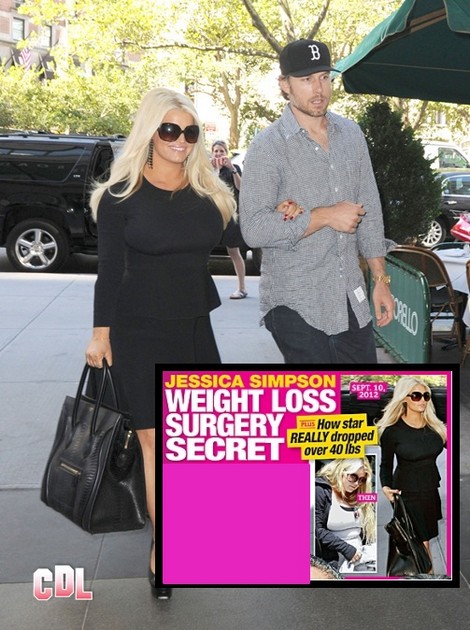 Did Jessica Simpson’s weight loss secret involve getting penciled in at the plastic surgeon’s office? The National Enquirer cover story this week alleges that Jessica might have held some pertinent information back in her big reveal with Katie Couric. The mag’s just not buying Jessica’s weight loss hustle, insisting she went under the knife in an attempt to fulfill her Weight Watchers obligation.

Now I know it’s the National Enquirer but I’ve heard crazier things. But would you really get plastic surgery and only take off 40 pounds? If you’re going to do it, go all the way! Cut it all off and tell the world that you and your treadmill are best friends for life! Or would that be too unbelievable? Jessica’s not known for her sticktoitiveness. Even she acknowledged she only lost all that weight for The Dukes of Hazzard because she practically starved herself. When her movie career dried up, so did that motivation. But I just can’t get behind the plastic surgery allegations. I’d need more proof. She just doesn’t look good enough and I don’t think she’s smart enough to only take off one layer so people don’t get suspicious. I’ll just never believe those Mensa stories….

I’ve been hard on Jessica today. If you missed my earlier rant, check it out here. So I’m going to turn the tables to Weight Watchers. First of all, it should be slapped for choosing Jessica as its spokesperson. Everyone knows she’s lazy as all hell! Bad choice and I bet it’s kicking itself in the ass now. Not everyone is Jennifer Hudson. That chick’s a weight loss machine! But Jennifer aside, I’m sick of celebrity endorsements. I understand they’re the bread and butter of the marketing world, but I want Weight Watchers to take a stand and choose one new mom and offer her $4 million to lose weight and see how she does. Better yet, let’s get four women and give them $1 million each to battle work, new babies, household chores and everything else they do throughout their days. And I bet you those women will be grateful and will make something happen. Wouldn’t you be more excited to see that? Let me know. I’m feeling grassrootsy today. Maybe if enough people respond, we’ll start a petition and send it to Weight Watchers!

Do you think Jessica would resort to plastic surgery to lose the baby weight? Did she owe it to Weight Watchers and the public to put on a better show and drop more than 40 pounds in four months?