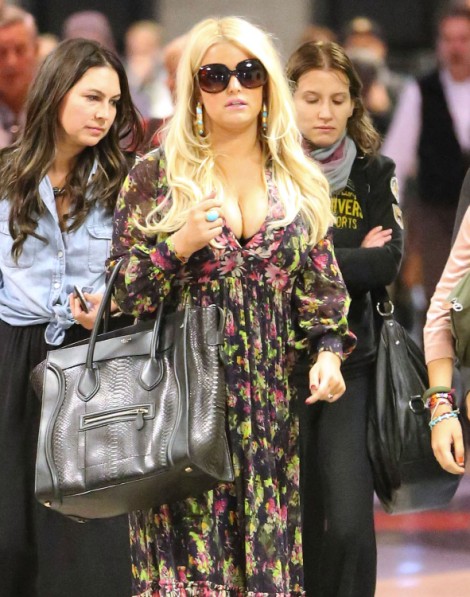 So we’ve been seeing a lot of Jessica Simpson lately (and no, that’s not a fat joke). She’s been making the rounds showing off her new, svelte (?), Weight Watchers figure and blabbing to everyone about how she’s lost 40 pounds. But, of course, the main message she’s spinning is that the numbers don’t matter. It doesn’t matter what’s on the scale as long as you feel good about yourself! Yea! Female empowerment! Whatever. She might pull that crap for the cameras but a “friend” of hers has a very different view on the story. The friend told The Chicago Sun-Times Jessica is constantly “obsessed” with losing weight and thinks of nothing else but getting back into her old Daisy Dukes.

“I know she’s got that big deal with Weight Watchers and all, but losing her baby fat is just about the only thing she’s talking about. It’s just tiresome,” the friend said.

So we can look at this a couple ways. Jessica had a huge reveal and a Weight Watchers commercial to film and she was freaking out and probably driving everyone else crazy along with her. Who among us wouldn’t feel that pressure? But who among us is paid to lose weight? The only thing she’s had to do for the last four months is lose weight and play with her new baby. That’s it! And all we’ve got to show for it is a commercial which only shows her from the neck down? I know I’m going to get some hate for this but Christ, she’s lazy! Women would kill to have that opportunity! And before you scream at me saying “But it’s hard! She’s just like us!” No, she isn’t! She has chefs and celebrity trainers and FOUR MILLION DOLLARS. I’d like to think I have more confidence in women. I’d like to think given all those perks, a woman not used to indulgence and sycophants would take advantage of that free time and make something happen. Jessica Simpson likes to eat but she’s not like us.

So, I’m sorry, I can’t jump on the You Go Girl! train. Think about it. You lose weight when the baby comes out and then you naturally lose weight by breast feeding. So how much weight has Jessica actually tried to lose in four months? Twenty pounds give or take five?

Have you noticed her people are playing damage control today? Us Weekly has a story about Jessica titled, “A Day in My Diet.” It’s pretty lean. If she actually did all she said she did there’s no way she’d only lose 40 (?) pounds.

Listen, I’m not bashing Jessica Simpson’s weight loss difficulties. It’s a b-tch. We all know that. I’m bashing her message. I’m annoyed that people are buying into it. She’s not as laid back and go with the flow as she’s letting on. Health is her new message. She doesn’t want to lose the weight too quickly because it’s unhealthy and she wants to show a good example for her daughter. Please! We aren’t stupid! I would much rather hear someone like Kate Hudson tell me she worked out for 6 hours a day to lose her baby weight (she did by the way) because that’s believable. That shows me anyone can have Kate Hudson’s body if they WORK their asses off for it. Jessica is making boatloads of cash off of convincing us her health is her number one priority. Was it her priority when she guzzled down butter covered pop tarts like they were going out of style when she was pregnant? Nope, because there wasn’t money to be made then.

Why do you believe Jessica isn’t being honest about her weight loss obsession? Do you think she’s embarrassed of the results? Will she kick her fitness up a notch after her less than impressive reveal?