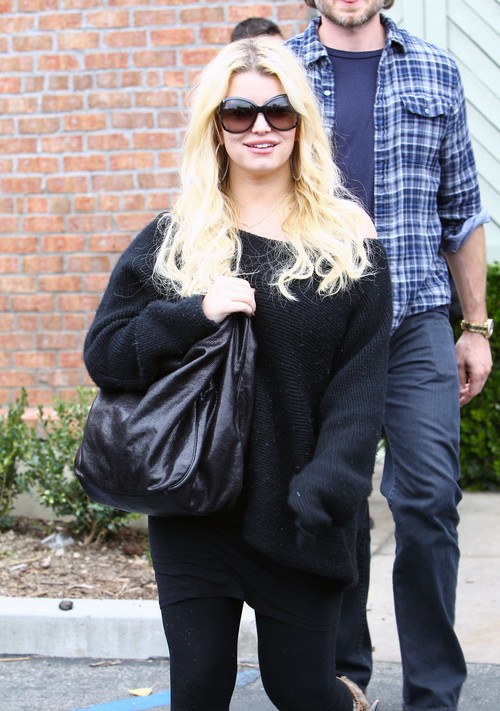 Jessica Simpson is pregnant with her second child. For weeks there have rumors that Jessica is cooking another biscuit in her Easy Bake Oven. Today Jessica herself confirmed the rumors are true! TMZ is reporting the former Newlywed and maybe someday she will be Mrs. Johnson tweeted the news. She posted a picture of her daughter Maxwell sitting in the sand with the words “Big Sis” spelled out in front of her. This will be the second time in 2012 that Jessica will be pregnant. She gave birth to her butter ball May 1. Jessica seems to be in the early stages of this pregnancy. TMZ posted a picture of Jessica at Target on December 23 wearing a flowy tunic with little to no baby bump.

Jessica also announced her first pregnancy on Twitter. She posted a picture of herself dressed as a mummy for Halloween with the caption “It’s true! I’m going to be a Mummy!” Both posts are well timed. The Halloween day post is fitting with her costume. For her second time around Jessica announced she is having another baby on the day another famous baby was born. Very clever, Jessica! Instead of putting out some boring statement she wanted to be cute and creative.

Earlier this year Jessica told Katie Couric on Katie’s talk show how much she enjoyed being a mother. Jessica also discussed her 70 pound weight gain while carrying her butterball Maxwell saying ““I put on more baby weight than I was planning on putting on. I really have to separate myself from the world’s expectations and really just look inside myself and be healthy with myself. I want to be a phenomenal role model for my child.” I think Jessica was OK with the weight gain but the constant criticism and the pressure of fulfilling her Weight Watchers contract wore her down.  Perhaps Jessica is an emotional eater and that is the real cause of the tremendous weight gain. Jessica has had issues with weight and what people have expected her to look like her entire career.  Jessica said in her Behind The Music episode that her record company asked her to keep losing weight and expected her to have six pack abs. She also had the pressure of being very thin for her role as Daisy Duke in the movie The Dukes of Hazard. Jessica was in the gym multiple times a day for several hours to prepare for the role.  She was so thin for the movie that even her famous Double Ds had lost weight. After filming wrapped her weight went up a bit but she was still looking slender and healthy.

Over the summer we saw pictures of Jessica at the gym but no one would let up and give her the benefit of the doubt. There were reports that she was in a panic about the weight not coming off as fast as she wanted. Some were saying Jessica was trying other methods and diet plans to lose weight just to fulfill her $4million contract.  I blame Weight Watchers more than anyone for Jessica’s despair.  The company told Jessica she had to lose all the weight by a deadline that they chose. In the real world losing weight, especially baby weight, is a process that you may not be able to control.  Anyone who has done the Weight Watchers Points Program will tell you it is a lot of work. They require you to log every sip you take and any small tastes of any food you eat in addition to your meals and snacks. There are some foods you can eat freely with out counting points, but the majority of the food you consume has to be measured for portion size and every ingredient you put in your recipe you have to count the points value. The online tools are helpful but it is still overwhelming to do all the work. Many people who quit the program and no longer have access to the online tools report they put the weight they lost back on. Weight Watchers traps you into staying with their program.  The new Weight Watchers 360 Degrees program is supposed to work with human nature. You still have to count points so I’m not sure if the promises of the new program will be any different.

Weight Watchers treated Jessica different than their other celebrity spokespeople.  It was never reported if Jennifer Hudson was not given a deadline to lose weight and if they dictated how much weight she needed to lose to keep her contract.  Now Jennifer continues to be a spokesperson for Weight Watchers and how the program keeps her from re-gaining the weight. She also looks like a bobble head and should cut back on her Weight Watchers obsession a little bit.  To embarrass Jessica and probably to placate the public wanting to see her progress the company ran a television ad showing her only from the shoulders and above as Jessica talked about the program. She must not have fulfilled Weight Watchers expectations by her first deadline or else why wouldn’t they show her whole body? Jennifer on the other hand was shown head to toe in all of her television ads as she was losing the weight. Why would Weight Watchers expect Jessica to achieve unrealistic goals for losing the baby weight? Jessica at times comes off as one  French fry short of a happy meal but in reality she is very smart. Her clothing line is worth $1billion dollars! Jessica also knows that just being herself is what endears us to her. She farts in business meetings. Just like the rest of us.