Jessica Simpson Rushing To Get Married Before Second Baby Is Born! 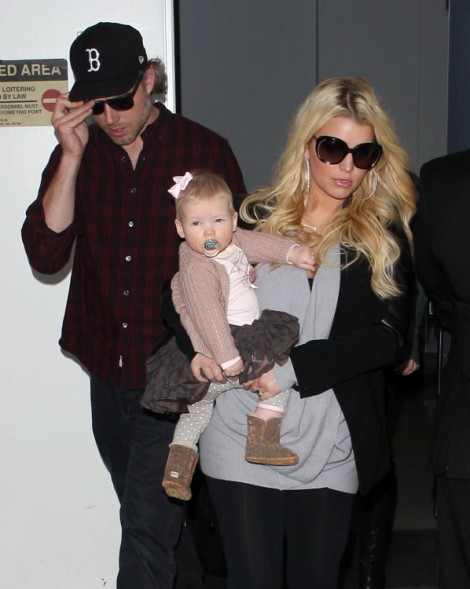 Apparently in between downing fried chicken bites at best friend CaCee Cobb’s wedding last weekend to Donald Faison, Jessica Simpson told friends, “This is the last time you’ll see me as a bridesmaid. The next wedding I’m at, I’ll be the bride.”

Sorry, I had to contain myself for a moment. Looks like Eric Johnson’s here to stay for a little while longer. I don’t know why wedding rings freak me out to so much. Even if Eric manages to get Jessica to say “I do” it doesn’t mean it will be forever. There’s still hope for Jessica, right? Right?!

Maybe not if you believe the National Enquirer.

“CaCee and Donald [Faison]’s wedding blew Jess away,” a source told the magazine. “She was so touched by their deep abiding love, she’s decided to fast-track her own ceremony. Jess and Eric are planning to marry in January or February and are debating between a wedding in Hawaii or just putting on a down-home casual affair at their Beverly Hills home.”

Jessica Simpson? Casual? Come the ef on! Biotch don’t do casual. She’s from Texas! She’ll do big and over the top because that’s how she likes things. But before we discount this story as bullshit, let’s think it over. I don’t understand why it would be OK to have one baby before you get married and not two. Why the hurry to be an honest woman all of a sudden? So the whole Jessica Simpson rushing to get married for baby thing doesn’t work for me. If anything, let’s call a spade a spade and just say Jessica has bride fever. I’ve seen it happen to women. It’s real!

But there’s another reason why Jessica might get married within the next month – the expanding waistline. Spanx aren’t going to be able to whole all that together much longer. She actually looked really good at CaCee’s wedding. If she can keep the buttered pop tarts at bay for a little while longer she might be able to pull something off remotely respectable. Because if she waits then she’s going to go all Drew Barrymore huge in Chanel and that’s not doing anyone any favors especially herself when she has to look back at those pics in 20 years. Either get married in those early pregnancy stages or just wait until after the baby’s born. I don’t understand waiting until you’re belly button’s popping out of the dress.

So will she or won’t she get married? Jessica Simpson has waited this long so I figured she’d just keep on waiting. Damn you CaCee Cobb and your lovely wedding. You gave Jessica ideas and now Eric Johnson might be around to bore us for good!